Governments around the world are scrambling to fill a power supply gap, stoking fears that rising energy prices will affect purchasing power and demand at a time when the global economic recovery is already under pressure due to supply-side constraints.

After a decade when depressed demand was the world’s biggest problem, we are suddenly bursting into a world of tight supplies. Globally, economic activity is ramping up as vaccines replace movement restrictions in the fight against Covid-19. However, a new global thirst for raw materials is being met with numerous supply-side constraints, which in turn is pressuring prices higher. Indeed, Bloomberg’s Commodity Spot Index hit a new all-time high this month. The crunch is being felt most acutely in Europe and Asia, where prices for gas and power have rallied to never-before-seen levels.

Natural Gas: The crux of the issue

The most pronounced price increases have been in the market for natural gas.

Contrary to demand for oil which remains relatively steady throughout the year with only small fluctuations from season to season, gas demand increases substantially each winter owing to its role in domestic heating (1).

These oscillations are normally managed in various ways: Countries can pump gas into underground storage during the low-demand summer months, they can draw on swing supplies (2) or they can import cargoes of liquefied natural gas (LNG) from countries like the US or Qatar. The gas industry used to operate almost entirely on point-to-point pipelines but the rapid growth of the LNG industry means seaborne cargoes have now created something more akin to a global market.

Demand for natural gas has been rising as the energy transition gains traction. While the ultimate ambition in the fight against climate change is to switch to renewable power sources (e.g. wind and solar power), gas is commonly called upon as a medium-term “bridge fuel” between the eras of hydrocarbons and clean energy sources (even if some critics argue that it is more of a wall than a bridge, competing with renewable energy for investment and policy support.…).

As autumn approached, it became clear that a perfect storm was brewing in the market for natural gas. When the penny dropped on the supply/demand imbalance, governments began trying to lock down supplies of the coveted commodity ahead of a potentially very cold winter.(3)

Here on the continent, we rely quite heavily on natural gas but domestic production has fallen sharply and the EU has to import nearly 90% of its natural gas from outside the bloc, with Russia as the chief supplier. Recently, as more countries (particularly in Asia) seek alternatives to coal – one of the prime culprits when it comes to carbon emissions – competition in the natural gas market has been intensifying. Worsening matters was the fact that wind turbines slowed in summer, during some of the least windy months experienced in decades, while maintenance projects at gas plants were delayed or neglected during the pandemic. 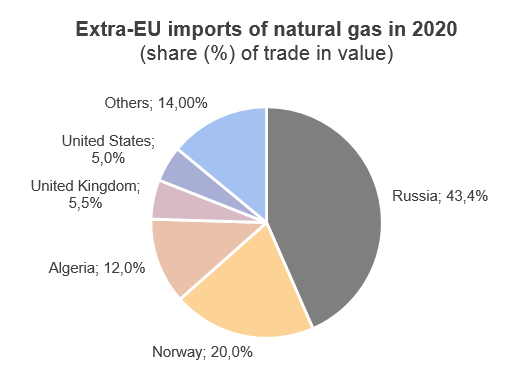 Another factor weighing on supply is divestment. In the investment world, fossil fuels are slowly  becoming a proverbial hot potato, and investors are showing less willingness to invest in developing supplies of a fuel which could potentially be deemed obsolete by 2050.

When Plan B doesn’t come through

On this occasion, Europe’s situation cannot be ameliorated by resorting to the aforementioned “solutions” applied in the industry to meet seasonal peaks in demand.

When it comes to storage, the EU entered the third quarter with lower levels of natural gas storage than in the previous year after a particularly cold winter 2020/21 that weighed on reserves. While the EU’s natural gas storage was at around 95% last October, it is currently at around 75% – the lowest level for the time of year since 2013.(5)

Groningen, in the Netherlands, is Europe’s largest gas field and was intended to act as a significant swing supplier to continental Europe. However, its huge supplies have been slowly depleted, triggering small earthquakes in the surrounding area and causing property damage. Another potential swing supplier could be Russia. For some weeks, the country – despite meeting its contractual obligations for gas delivery – came under criticism for appearing to send little extra to help to meet the enormous demand in Europe. Since then, President Putin has said that Russia is ready to discuss additional actions and cooperation with its European partners, though not without criticizing Europe’s management of the industry. He added that Russia had already increased its gas supplies to Europe by 15% so far this year. (6) It is still to be seen whether additional supply from Russia can temper prices but what is good to know is that the Nord Stream 2 pipeline, one of the most controversial European energy projects (facing, among other factors, resistance from the US), is completed and ready to pump Russian gas to Europe. However, nothing is flowing yet because it is still awaiting clearance from Germany’s energy regulator.

Procuring cargoes of liquefied natural gas is also a less-than-optimal solution, given the global bidding war in this space with demand in Asia rising substantially. As Henning Gloystein at Eurasia Group, a consultancy commented in the Financial Times, “Every year China connects up to 15m homes in its coastal cities to the gas grid — that’s like adding a Netherlands and a Belgium worth of demand every year… So when it gets cold in China the gas price goes up in the UK and Germany.”(7) Earlier in the month, China ordered its state-owned companies to secure supplies “at all costs”.

Despite the fact that natural gas only supplies around a fifth of Europe’s electricity, higher prices are putting disproportionate upward pressure on electricity tariffs in a model where wholesale electricity costs reflect the price of the last unit of energy bought and where gas is the adjustment input to meet demand.

A halo effect on other power sources

With natural gas prices through the roof, governments are already seeking out alternative power sources, pushing up prices across the board.

OPEC, the organization of oil-exporting developing nations that coordinates and unifies the petroleum policies of its member countries, has commented that if the trend in natural gas prices continues, “fuels such as fuel oil, diesel, and naphtha could see support, driven by higher demand for power generation, refining and petrochemical use.” (8)

Oil has risen towards $84 a barrel and is in sight of a three-year high. Despite higher prices, OPEC+, this month agreed to stick with its plan for a 400,000 bpd production increase for November as it gradually unwinds output cuts it made to support previously low prices.

Coal has surpassed its all-time peak set in 2008.

China, which is facing a power crunch with utilities unable to keep up with post-pandemic demand, has implemented various measures to try and alleviate the situation. For example, it has said it will allow coal-fired power plants to pass on the high costs of generation to some end-users via market-driven electricity prices (in a bid to encourage loss-making generators to increase output) and has urged coal miners to boost output.

In India, the world’s second largest coal producer after China, a surge in power demand that has outstripped pre-pandemic levels means  coal supplies are no longer sufficient. The government has asked power producers to import up to 10% of their coal needs which could put further upwards pressure on global prices. The Indian government has warned states that their power supplies will be curbed if they are found selling electricity on power exchanges to profit from high prices.

Both companies and household are impacted by the energy crunch.

If you live in continental Europe or the UK the natural gas that heats your home this October is costing at least five times more than it did a year ago as a result of the energy crunch[9]. With inflation pressures already starting to bite consumers, it could be a difficult winter for many.  Even alternatives solutions such as warming up with a coffee or a hot chocolate, or layering up with extra clothes will  more expensive alternatives this year given the price appreciation of sugar, coffee and cotton… European inflation for September was quoted at 3.4%, the fastest pace since 2008, while US Inflation has been above 5% for four consecutive months.

Governments are cognizant that this could hamper the economic recovery – consumption is an important growth driver. Further, “gilet jaune” protests – which began in France in autumn 2018 due to a fuel price rise – are still fresh in the memories of many governments. The EU energy commissioner has urged the bloc’s member states to provide targeted support to its citizens, while the European Commission suggested publishing a toolbox of options for how governments and the EU could react.

Italy, for example, already committed €3bn support to low income households, France €580m and the Netherlands €500m. Policy makers in Spain want to reduce excess profits from utilities that benefit from high energy prices. Over the Channel, the United Kingdom is providing emergency state-backed loans to utilities that take on customers from bankrupt energy providers.

Rising inflation, amplified by the energy crisis, complicates the task of central bankers. They are eager not to disrupt the economic recovery by withdrawing their monetary medicine too soon, but at the same time, risk falling behind the curve if inflation enters into a self-fulfilling feedback loop.

Already, a fresh round of price surges in the energy market has led to another spike in inflation expectations across multiple countries.

If markets lose faith in the “inflation will prove transitory” narrative that central banks have so carefully constructed and inflation expectations become embedded, some may be forced to tighten their monetary policies sooner than intended to prevent economic overheating. Already in the US, future prices imply that investors expect a rate hike as soon as September 2022, while the Fed’s official dot-plot does not indicate any hike until 2023. In Europe a rate hike is now priced for Q3 2023 and in the UK, a hike is now priced before the end of the current year.

Looking to the future with optimism

From a macroeconomic perspective, the good news is that global economies are less reliant on energy than in the past due to significant energy efficiency gains over the years. Energy intensity, or the amount of energy necessary to produce a product or a service, has fallen by more than half since the 1970s, when frequent energy shocks caused stagflation.

It’s reasonable to believe that prices will stay supported as demand continues to recover from the pandemic. However, the rise in prices is likely to prove self-limiting, as high prices will incentivize increased production.

While there is no silver bullet or quick fix to the current situation, there is a long term solution: accelerating the energy transition. Indeed, EU climate policy chief Frans Timmermans said, “The quicker we move towards renewable energy, the quicker we can protect our citizens against high prices.” But as the gilet jaune protests highlighted, actions to prevent “the end of the world”, must not disregard the needs of those struggling to make it to the “end of the month” and governments must deploy appropriate infrastructures to ensure this.

The International Energy Agency (IEA) has said investment in renewable energy needs to triple by the end of the decade if the world hopes to effectively fight climate change and keep volatile energy markets under control.

We expect to see an acceleration in the deployment of renewable energy sources, but also of energy efficiency solutions, which are important in  diminishing the demand for heating (insulated render systems/ external wall insulation etc.). For investors, this presents numerous opportunities.