Corrections are a pretty normal feature of functioning markets. However, post ante, it’s human nature to seek some kind of rationalisation for the decline. For October’s market tumble, there was no shortage of culprits including, trade war fears, the IMF’s downgrade of its global growth estimates, and higher input costs/ wage growth which threaten to erode corporate margins. However, the Federal Reserve (Fed) shouldered a significant portion of the blame, given that the correction occurred on the heels of its third interest rate hike of 2018. Even the President himself took to blaming the Fed, saying that it had ‘gone crazy’ by continuing to raise rates.

A rising Fed rate has a ripple effect on other markets because it implies that companies will ultimately need to pay more to borrow money in order to run and expand their operations – this can eventually effect both earnings and the stock prices.

However, the most recent rate hike was by no means a game changer for financial markets. So why, all of a sudden, would the equity market drop 3%, and Treasury yields hit multiyear highs, when the Fed has given guidance all along, making its intentions to normalize monetary policy as clear as a glass of San Pellegrino? A lot of it depends on whether you see the glass as half empty or half full… Or whether you subscribe to conspiracy theories about the Fed serving a small financial elite. 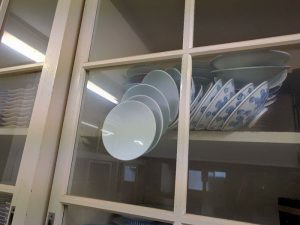 To conceptualise the current state of interest rates from another angle, we take a very different, but just as zany theory from quantum physics: the Schrödinger paradox.

Schrödinger was an Austrian physicist, famous for a thought experiment which sought to show the absurdity of imposing quantum mechanics on to everyday objects. Originally he spoke of a cat inside a box with fatal substances, but on more humane grounds we will illustrate with Schrödinger’s plates…

Under the laws of quantum mechanics, until the cupboard is opened, the plates which have slipped off the shelf are simultaneously broken and unbroken at the same time.

What’s that got to do with rates?

Interest rates have now reached a level at which they are simultaneously no longer ‘accommodative’ (real interest rates turned positive for the first time since 2009), but as Mr. Powell himself has said, they are far from the neutral rate (which neither stimulates nor contains growth).

So for now, rates are not so high so as to cause a calamity in bond markets/ riskier assets – since the 1960s, we have not seen a recession start without the effective federal funds rate being above 5%. But the Fed has to keep raising rates gradually in order to keep inflation under control and to accumulate some ammunition to be used in a future downturn. If it acts too gingerly, we could see a re-run of the 1970s when inflation got out of hand and interest rates of around 20% were needed to resolve the situation.

This is not to say that the Fed is suddenly going to open the door, allowing the plates to crash (allowing rates to soar in our analogy). Rather, it is likely to move at a glacial pace, responding to growth and inflation ever so delicately, trying to engineer a soft landing as it removes support. Nevertheless, policy tightening is a real risk and investor fears about an acceleration in the pace of hikes are not going to go away. JP Morgan recently noted that “While we acknowledge that it is not possible to attribute the market impact of each speech with certainty, simple math indicates that $1.5 trillion of US equity market value was lost this year following [Jerome Powell] speeches.”

Albeit, we still view the glass as half full. Whilst they persist, robust earnings and strong fundamentals should serve as a metaphorical bubble wrap protecting risk assets from rising rates. Over the longer term, the removal of central bank support, will leave certain asset classes looking evermore precariously balanced, and a nuanced asset allocation will become even more crucial.