This week, the European Commission presented the EU Chips Act, described as a ‘comprehensive set of measures to ensure the EU’s security of supply, resilience and technological leadership in semiconductor technologies and applications’. Involving over €43 billion, the package which still must be approved by all member states, is aimed at bolstering Europe’s competitive edge and enabling the digital and green transition.

As has been well documented, due to factory closures at the height of the pandemic and a spike in demand for all manner of electronic goods, the world is grappling with an acute shortage of semiconductors (often referred to as chips, these are silicon-based computational building blocks used in everything from washing machines to smartphones to military systems). As such, a whole host of industries around the world has come under pressure.

In Europe, for example, the EU Commission reports that production in the auto sector in some Member States decreased by one third in 2021 on the back of the chip shortage. A report released by the US Department of Commerce in January found that the US faces an “alarming” shortage of semiconductors. Demand for the vital components jumped 17% from 2019 to 2021, with no proportionate increase in supply, leaving the market so tight that the median inventory amongst US manufacturers that rely on semiconductors had fallen to less than 5 days’ worth of chips; pre-pandemic chip inventories were sitting at around 40 days. This means that even a small production hitch could destabilise supply chains for all manner of goods and Commerce Secretary, Gina M. Raimondo has warned that the situation is threatening American factory production and helping fuel inflation.

This is particularly visible in the US used car market; the shortage has reduced the supply of new cars and as a result, in January, used car prices were up almost 40% year-on-year, and new car prices up about 12%.

Demand looks set to remain firm with new markets for the chip industry emerging such as industrial automation, automated vehicles, cloud infrastructures, the Internet of Things, 5G/6G connected devices, the metaverse, supercomputers and so on…

The process of producing semiconductors is highly complex, consisting of many interdependent steps and it is knowledge and capital intensive.

The players in the semiconductor production process can be broadly grouped into four main categories:

Europe has a strong presence in some R&D intensive fields such as machinery (Dutch firm ASML is a global leader, making machines for the likes of TSMC) and in fundamental research (through university-linked research centres such as IMEC in Belgium or CEA-Leti in France). However, Europe is a relatively small player when it comes to actually manufacturing those designs, accounting for only 10% of the market for manufactured chips (via STMicro and NXP, for instance). As such, the EU has not been able to respond the global chip shortage from a position of strength.

Viewing semiconductors as a strategic assets for key industrial value chains, the EU wants to change this.

“…most of our supplies come from a handful of producers outside Europe. We simply cannot afford this dependency and uncertainty any longer”

Back in July 2021, the Commission launched the European Alliance on Processors and Semiconductor technologies noting that from smartphones to 5G to the Internet of Things and beyond, these technologies are crucial for a successful Digital Decade.

Building on this, the EU Chips Act proposed in February 2022, would mobilise more than €43 billion euros of public and private investments and aims to bring about a thriving semiconductor sector from research to production to create a resilient supply chain (€12 billion in additional public and private investment by 2030, on top of more than €30 billion of public investments already foreseen, backed by NextGenerationEU, Horizon Europe and national budgets). The goal is to enable the EU to double its current market share to 20% in 2030 – essentially quadrupling production given that the market itself is set to double in this time period.

The key components of the plan are:

•   Chips for Europe Initiative – seeks to pool resources from the EU, third countries and the private sector to strengthen existing R&D and innovation, to ensure the deployment of advanced semi-conductor tools, pilot lines for prototyping, testing and experimentation of new devices for innovative real-life applications…

•   A new framework to ensure security of supply by attracting investments and enhanced production capacities. Europe needs new advanced production facilities but these come with huge up-front costs. The plan proposes to:

•   Set up a coordination mechanism between the Member States and the Commission to  monitor the supply of semiconductors, estimate demand and anticipate /respond to shortages.

•   Invest in R&D (doubling down on existing strengths), focusing for instance on transistors below 3 nanometres and on disruptive technologies for artificial intelligence.

(N.B. The nanometer number indicates the size of the transistors: A small number means a higher number of transistors can be packed per square millimeter on a chip; the more transistors on a chip, the more powerful and efficient the microprocessor.) 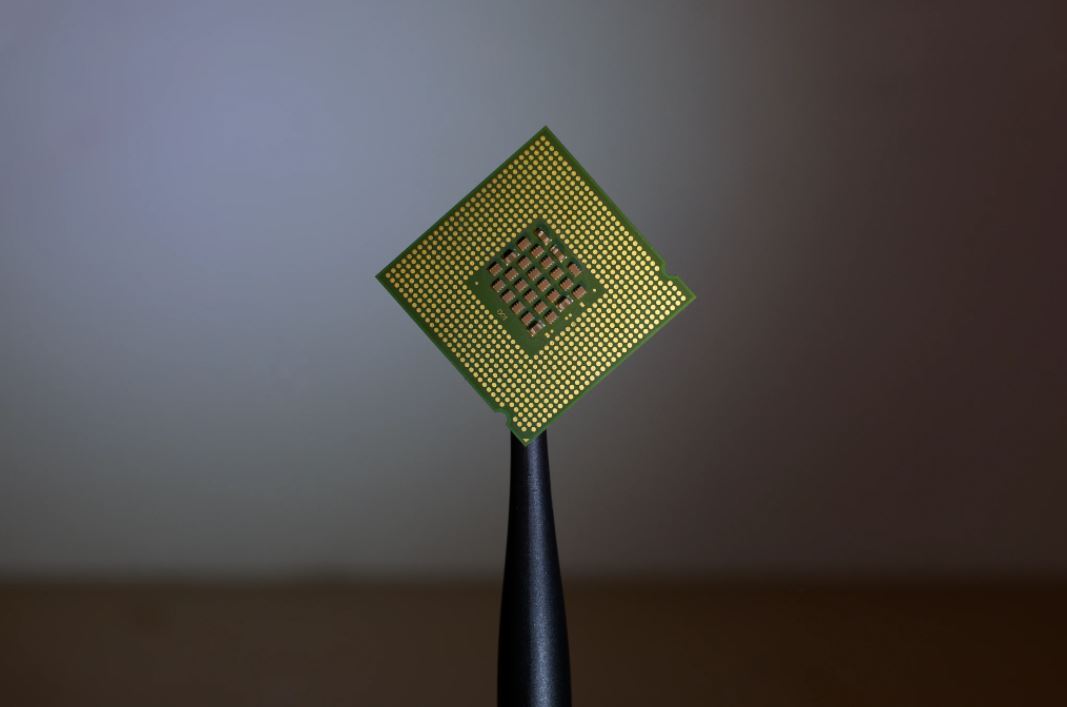 If successful (this is not a given, especially if we consider the Commission’s 2013 attempt to “double” Europe’s share of global chip production to 20%), the plan will yield several key benefits for Europe.

It could boost growth and innovation and prevent future disruptions due to supply chain crunches. It will also allow Europe to chart her own course in the fourth industrial revolution and in the new era of “smart everything”, AI and connected devices. If chip design and manufacturing are not localised, then Europe will have to rely on imported systems from other countries, designed on the terms and standards of those countries.

The plan will also help the EU with its ambition to become the first carbon neutral continent by 2050, with semiconductors being a key component in the electrification of the economy. However, each new generation of semiconductors requires more energy, water and greenhouse gases to create. By bringing production home, the EU can create its own standards and subsidise companies that adhere to them.

The European Parliament and Member States will need to debate the Commission’s EU Chips Act in the ordinary legislative procedure. If adopted, the Regulation will be directly applicable across the EU.

What are other countries doing?

Semiconductors have risen to the top of sovereign agendas the world around.

The US is already home to dominant semiconductor companies like Intel and Nvidia. However, according to the Congressional Research Service (CRS), the United States’ share of global semiconductor fabrication capacity has been on a steady decline for decades, falling from roughly 40% in 1990 to around 12% in 2020. Due to high costs and complexity, many US chip firms transitioned to a “fabless” model, focusing on designing new, more advanced chips while outsourcing their manufacturing abroad, primarily to East Asia, which is now home to nearly 80% of global chip fabrication. Some of America’s largest tech firms, including Google, Apple, and Amazon, rely on Taiwan’s TSMC alone for nearly 90% of their chip production. TSMC, alongside Korea’s Samsung, already mass produces 7-nanometer chips and as of now, these companies have unrivalled positions in high-end chip manufacturing capacity.

In January 2021, the US Congress passed the Creating Helpful Incentives to Produce Semiconductors (CHIPS) for America Act. This legislation, enacted as part of the National Defense Authorization Act, authorized a series of programs to promote R&D and fabrication of semiconductors within the US given that many strategic technologies such as quantum computing and AI rely on advanced semiconductors.

Later, in June 2021, the Senate passed the United States Innovation and Competition Act (USICA), which designates funds to finance the programs outlined in the CHIPS for America Act, including $39 billion in financial assistance for chip plant construction over five years, and another $11.2 billion for R&D. For now, the Act remains in legislative limbo as it has not been approved by the House, but there is bipartisan support for using public funds to ensure a more robust semiconductor manufacturing base in the US, suggesting that it could eventually pass once the details are ironed out. Already, TSMC has planned to build a $12 billion foundry in Arizona, while Intel has said it would invest up to $100 billion to build potentially the world’s largest chip-making complex in Ohio

In China’s newly released 14th Five-Year Plan (covering the period from 2021-2025), semiconductors were explicitly identified as a strategic technology priority, with the objective of achieving “technological self-reliance.” China’s homegrown tech behemoths such as Alibaba, Tencent, Baidu and Meituan have all started investing into chip development while ZTE has emerged as a trailblazer recently, with the news that it is now using TSMC’s 7-nanometre chip production technology as well as its advanced chip packaging technology to build the processors that power electronic devices including smartphones, servers and base stations. According to the Semiconductor Industry Association, the Chinese government plans to invest well over $150 billion from 2014 through 2030 in semiconductors. It was recently announced that the government will subsidise up to 30% of investment in semiconductor materials and equipment projects up to $15 million in Shanghai.

Long-term investors should bear in mind that the semiconductor industry is a highly cyclical one, subject to periodic booms and busts and a shortage could at some point become a glut, especially with so many key players ramping up efforts to boost production. However, the move by the EU and other governments  corroborates our conviction that investment thematics such as digitalisation and sustainability are only set to gain traction, with political sentiment building.

The EU is serious about becoming the first carbon neutral continent by 2050, and the might of public policymakers is being thrown behind this goal. Digitalisation, while a structural shift in its own right, will be a key component of the green transition. There are various ways to play these themes and the sub-themes within, beyond having a laser focus on one sector alone (such as semiconductors). Companies that find themselves at the intersection of these two megatrends are well poised for the future.