Sunday plays host to the first round of the French Presidential election. In the likely scenario that no candidate wins an outright majority, the two candidates who receive the most votes will go through to a runoff on Sunday 24th April. The outcome, which will have implications for the future trajectory of the French and European economies, is still very uncertain. Despite this, the risk premium for French government bonds (as expressed via the spread) has not risen substantially, as it did in 2017.

Incumbent, Emmanuel Macron is up against eleven other candidates from all over the political spectrum. According to Politico’s Poll of Polls, the current three front-runners are Marine Le Pen, the leader of the traditional far-right party Rassemblement National (National Rally); Jean-Luc Mélenchon, leader of hard-left party La France Insoumise (France Unbowed); and Macron himself, who positions himself on neither the left or the right. Emmanuel Macron is still the big favourite to succeed himself as French president for five more years.

However, poll results are only a snapshot and a lot can still change – especially difficult to predict is the outcome of the second round. Macron’s main opponent, Marine Le Pen, is closing the gap fast. In recent days, her campaign has gained momentum and on Monday, a poll conducted by Harris Interactive revealed that 48.5% of voters said they would vote for her in a likely runoff against Macron; the highest percentage she has ever notched. This, considering the margin of error, means a victory by Macron is not a foregone conclusion and Macron himself warned the far-right is a threat.

Former banker, Macron, is perceived as the business-friendly candidate, having cut taxes and  rolled out various reforms to spur growth and job creation.  The French economy performed better-than-expected in 2021, recording 7% growth (higher than Germany, Italy and Spain), while unemployment sank to 7.4% in Q4 2021, its lowest rate since 2008. At the same time, France’s public debt remains substantial (112.9% of GDP in 2021, down from 114.6% in 2020, according to the national statistics office INSEE [ii]). Also, despite growth, studies have also found that some French people feel left behind and have referred to Macron as “the President of the Rich.” [iii]

For investors, there are some key factors in the election that could be meaningful for portfolio positioning.

Firstly, the candidates have varying energy policies; a topic that carries a lot of weight with Europe in the midst of an energy crunch. Without any significant raw materials in its soil, France has long relied on nuclear power and all the main candidates except Mélenchon agree on the need for more nuclear power to strengthen France’s energy independence. Macron has positioned himself as an advocate against climate change, arguing that with nuclear power, investment in renewables and energy saving measures France “will become the first great nation to exit from fossil fuels”. He wants to set aside €50 billion for the ecological transition.

Back in January, Le Pen’s spokesperson and MEP Nicolas Bay, presented her climate and energy program noting, “we cannot decouple the very legitimate concern for climate change from economic concerns and purchasing power.” Le Pen’s key proposal is to fuse environmental action and social assistance by lowering VAT on all energy products to 5.5% (from a current level of 20%) and to encourage households to improve the energy performance of buildings. She is opposed to wind turbines and would prefer hydrogen-powered vehicles over electric equivalents. “The battery-electric vehicle is a transitional model; it places us in a situation of strong dependence [regarding] rare-earth elements and Asia,” Bay commented, adding that “the real technological leap would be hydrogen”.

Mélenchon wants to freeze the prices of gas, petrol and food in the short term, impose a levy on polluters, end nuclear and fossil fuel-generated power by 2050 and end market determination of energy prices with a price stability guarantee.

According to research conducted by the Ipsos group, 58% of those polled said purchasing power is the most important topic to them. Healthcare and the environment followed, at 27% and 25%, respectively.

Secondly, there will be significant implications for domestic businesses in France. Macron seeks to reiterate the dirigiste (interventionist) approach Charles de Gaulle used in the 1960s for the fourth industrial revolution. He proposed to invest €30 billion on high-tech industries including semiconductors, life sciences and space exploration, and has called for the implementation of “an industrial strategy, meaning the deployment of 100% French supply chains”, saying he would invest to the tune of €50 billion a year, thanks to savings due to pensions and benefits reforms and cuts in government costs. Le Pen wants to intervene to set prices, distribute subsidies to prop up faltering sectors of the economy and set up a French sovereign wealth fund to invest in strategic sectors. Mélenchon hopes to pass a “social emergency law” after taking office, increasing the minimum wage to €1,400 per month, and capping salary differences between workers and CEOs at 1 to 20. He also wants to prevent the top companies listed on the French stock exchange, the CAC 40, from paying dividends and to implement a 32-hour work-week.

Another factor that hinges on the outcome is European integration. Marine Le Pen, who is entering the race for the third time, does so with a more diluted manifesto, aimed at appealing to a broader swathe of right-wing voters. Her party has dropped its Frexit rhetoric and unpopular plans to exit the euro. However, relations with Europe would likely become much more abrasive through moves to prioritise the French constitution over international law and to reimpose border checks. Mélenchon wants to withdraw from NATO and use a veto in the EU to block new free trade agreements, as well as enlargement without social and fiscal alignment. Under Macron, France has held the torch for European sovereignty.

What are the markets saying?

Until recently, bond markets showed little consideration for the upcoming elections. While the spreads of French Government bonds (OAT) over their German counterparts have increased since the beginning of January, it is only more recently that some investors have started to price in more so-called “Le Pen risk”. With only 3 percentage points separating Macron and Le Pen in polls, and taking the margin of error into account, it is surprising that markets have not repriced the risk more.

Looking at today’s spread of the French OAT over the German Bund, one can see it is still far from the levels seen during the French elections of 2017. This is despite the fact that Macron’s lead in polls was substantially higher back then. Maybe this is because Macron is now the President running for reelection, compared to being a relatively young tiger in politics.

If the gap between the candidates narrows further, one could expect to see the risk premium for French Government bonds (as expressed via the spread) opening up.

If the market is completely wrong-footed, as it was in the case of the election of Trump and the referendum on Brexit, we could be in for a turbulent ride with a sharp increase of the risk premium for France. 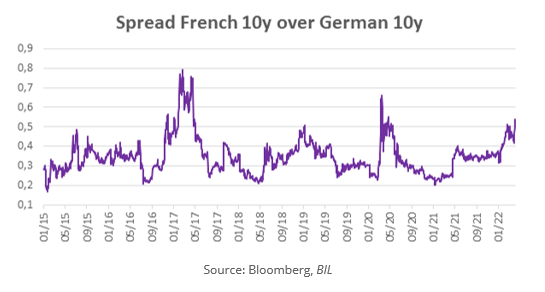 What is also worth noting is that after the presidential election, a new parliament will also be elected on June 12th. This vote is also very important because the outcome largely determines the extent to which the elected president can smoothly roll-out their political agenda.