The war in Ukraine has banished the “transitory” inflation narrative to the realms of fiction. Renewed supply woes have sent the prices of various commodities skyward, heralding another burst of cost-push inflation – the type which central banks have less influence over. With the last comparable episode having occurred decades ago, it is essential that investors and consumers refresh their memories about the corrosive effects of inflation – which are dramatic when compounded over a longer-time horizon –  and act to counter them.

In March, inflation continued its relentless rise, turbo-charged by higher energy costs. In the Eurozone, it broke a new record for the fourth consecutive month, coming in at 7.5%. In the UK, it dialed in at a 30-year high of 7%, and in the US, it reached 8.5%, the highest rate since 1981. Originally, it had been hoped that inflation would peak early-2022 as pandemic-related kinks in global supply chains were ironed out: geopolitical developments, more military spending, strong demand and labour shortages have likely extinguished this hope. 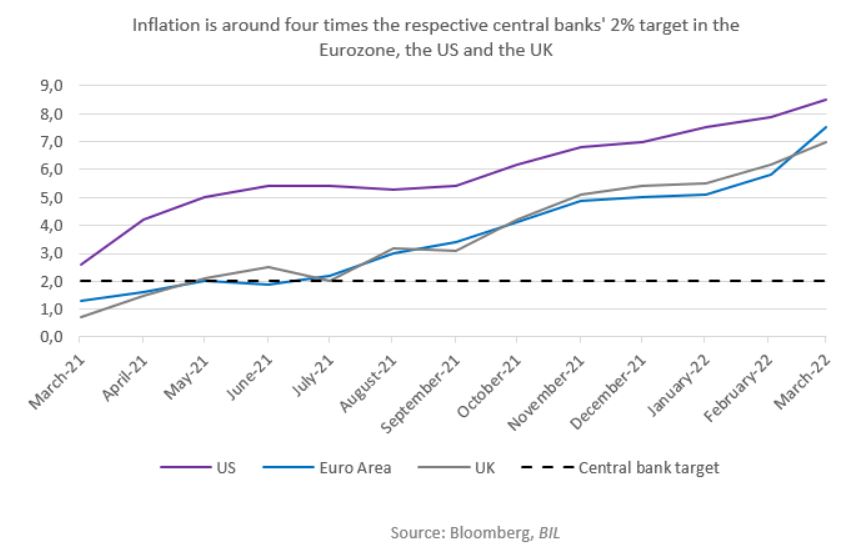 Consumers, investors, nor central banks can afford to be complacent. With regard to the latter, a loudening chorus of criticism is pressuring our monetary guardians to do more to bring inflation under control. Speaking in the Financial Times, Otmar Issing, the ECB’s first chief economist when it was created in 1998, described inflation as a sleeping dragon that has now been awoken. He also said the ECB  was suffering from a “misdiagnosis” of the factors behind the surge in prices, having “lived in a fantasy” that played down the danger of inflation spiraling out of control. At its meeting on 14th April, the ECB confirmed its intentions to end net asset purchases over the summer and to raise interest rates “some time after”.

Across the pond, James Bullard, president of the St Louis Fed and FOMC voting member, last week told the FT that it is a “fantasy” to think the US central bank can bring inflation down sufficiently without raising interest rates to a level where they constrain the economy. While other Fed officials generally support bringing rates towards a “neutral” level this year (at which they are neither stimulating nor curtailing growth, estimated to be roughly 2.4%), he argued that “neutral is not putting downward pressure on inflation. It’s just ceasing to put upward pressure on inflation.” From here, the direction of US rates is certain (North), as is the fact that the Fed will begin to reduce its balance sheet (at a pace of $1.1 trillion per year).

Even though inflation might retreat slightly from its current peak levels, we expect it to continue running well above the common 2% target on both sides of the Atlantic, maintaining pressure on central banks to pursue less accommodative monetary policy. As they try to tame the dragon, investors must act to protect their wealth in this new inflationary landscape.

Normally, investors accept a degree of downside risk on their investments in exchange for upside potential over time. For those holding cash, inflation represents a guaranteed loss, with no upside potential. 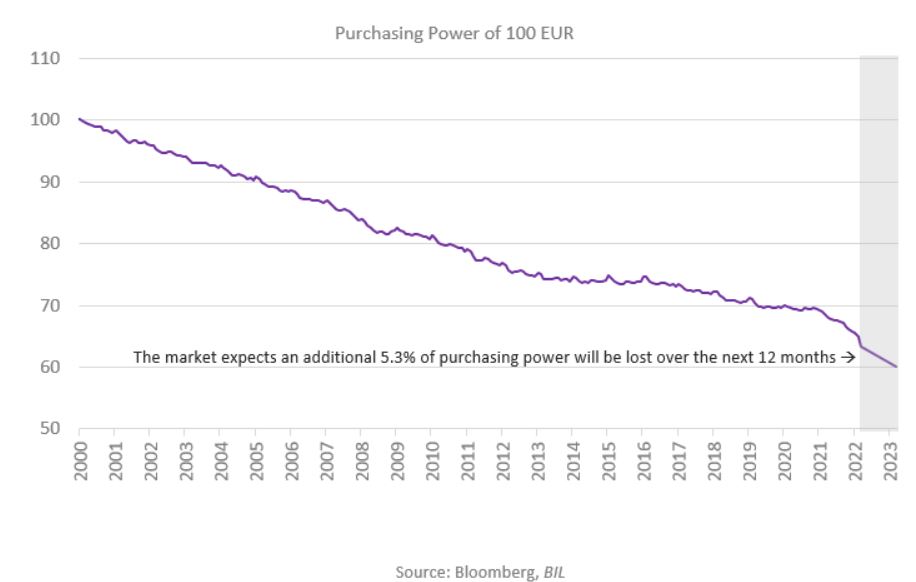 While no investment is fully inflation-resistant, the good news is that different asset classes are not evenly impacted by its power of decay. As such, one of the best defenses is to curate a portfolio of those assets which better resist its corrosive effects.

One way to partially fend off inflation is with a well-diversified stock portfolio. Though we envisage slower growth this year, a recession is not our base case, and the investment case for equities remains intact, underpinned by robust earnings expectations – particularly in the US. On top of that, sectors such as Materials and Energy tend to benefit from higher commodity and energy prices, while Financials typically receive a boost from higher rates (though investors should keep in mind that European financial firms are disproportionately affected by sanctions on Russia.)

While bond investors are generally considered to be more conservative, recently they have been living dangerously, especially if exposed to longer-dated instruments: Heightened inflation expectations and the prospect of monetary tightening have pushed core yields and credit spreads higher, leading to lower prices for such bonds. There are however some corners of the fixed income market that offer better shelter, for example instruments with a short duration or those with a high buffer protecting against rising rates, found in, for example, select pockets of the high yield segment. With the ECB and the Fed pretty clear about where they are headed (towards tighter monetary policy), reduced uncertainty should lead to a reduction of interest rate volatility, hence supporting credit investments (interest rate volatility is correlated with credit spreads).

Some are wondering whether they should move into typical inflation shields: Treasury Inflation-Protected Securities, more commonly referred to as TIPS. However, it seems as though that ship has already sailed. TIPS rise in value when expectations of future inflation rise and already-elevated inflation expectations limit further upside.

Holding some gold in a portfolio is generally a good inflation hedge over the longer term too, but we caution against being over-exposed, noting that rising real rates could eventually cap upside potential.

All in all, an inflationary spike is no longer the stuff of “once upon a time…”. After a decades-long slumber, inflation is back as the single most important factor for investors, savers and consumers, who must be cognizant about its corrosive effects on wealth. Those with cash under the metaphorical mattress are surely sleeping more uncomfortably than the Princess who had the pea under hers, if we are to keep our fairytale analogies going. While market volatility is expected to be higher this year, this is the price we pay for higher expected returns over time. Keeping cash is a guaranteed way to lose purchasing power, without any upside risk.