After a prolonged skyward rally, stocks have pulled back – quite dramatically – in a unified global sell-off. But, beyond the ominous headlines, economic fundamentals are almost unequivocally positive. In light of this, we assume the recent sell-off to be technical in nature and take this as an opportunity to moderately increase our equity holdings in select markets.

The sell-off was ignited when US Labour Department data revealed rising wage numbers, sparking fears of inflation and rising interest rates. As volatility flickered back to life, the sell-off was exacerbated by an unwinding of instruments designed to short volatility (worth over USD 300 billion in total) and an evaporation of electronic liquidity. The longer the sell-off persists, the more likely it is to affect sentiment and future data points, but at present, fundamentals remain strong.

The market’s laser-focus on wage growth data was surprising, especially given that the data was positive and in line with the objectives the Federal Reserve (Fed) is openly pursuing. As the San Francisco Fed President noted in a speech entitled Expecting the Expected: Staying Calm When the Data Meet the Forecasts: “Consumer spending, manufacturing activity, and construction are all showing strong numbers. And it’s part of a global trend of stronger-than-expected growth…The outlook is positive.” Against this backdrop, the market sees two Fed rate hikes in 2018 as a ‘done deal’ with a third more firmly baked into expectations. The 10-year Treasury yield could reach around 2.95% by the end of the year. However, the risk to markets is the speed of rate rises – there will be a sharpened focus on Jerome Powell’s press conference after the March FOMC meeting and any signs of an acceleration in hiking will create jitters.

Positive economic momentum is mirrored in Europe and the IMF has recently upgraded growth forecasts for the region. However, inflation prints still dally below the ECB’s target of “below, but close to 2%” – in January, it was 1.3%. Mario Draghi has said an interest rate hike in 2018 is very unlikely, providing a green light for a continuation of the expansion. Whilst the Italian elections in March are likely to create some volatility, overall, risk is contained and the probability of an ‘Italexit’ has subsided.

Relative strength indicators show that equities were oversold during the sell-off, which the IMF’s Managing Director, Christine Lagarde, has called a “welcome correction”. It is true that 2018 may be the year we see PMIs roll over or move sideways, but in the meantime, data points to stronger revenues, margins and multiples on the horizon. Given the strong underlying fundamentals, for those who can palate higher volatility, there is an opportunity to increase equity exposures in order to benefit from the last leg of the cycle and a potential consolidation at higher levels. The BIL Investment Committee has thus taken the decision to maintain a strong European overweight, whilst adding further to US and Emerging Market (EM) equity holdings.

It is an opportune moment to buy US equities; the dollar is low whilst the US forward P/E ratio has de-rated (from 18.7x to 16.7x) owing to higher earnings-per-share estimates in light of tax reforms. Though the US is late in the cycle, signs of overheating are scarce. Normally, if the market was peaking, we would expect to see excess leverage in markets (growth of margin debt in NYSE stocks has been slowing), recession signals (these are mild – the NY Fed Probability of recession in the US over the coming 12 months is only 10.4%), and a real rate above 2% (the Fed funds effective rate less Consumer Price Inflation currently gives a negative figure). In terms of US sectors, we prefer: IT for exposure to secular growth themes; energy, given that this sector’s performance has lagged the +45% oil price surge that has played out since June 2017; and financials – this is the most sensitive sector to rising bond yields and banks are key beneficiaries of tax reform.

Whilst cyclical sectors have started to outperform, cyclical regions are yet to catch up, which bodes well for Europe and Japan. To allay fears of a rising euro, investors can consider European small caps, which have less exchange-rate sensitivity. We also favour financials in this region as a hedge against rising rates.

EM are attractive in terms of valuations and there is room for a degree of catch up vis-à-vis developed markets, which rallied towards the end of 2017. EM were among the most oversold asset classes in the global equity correction and we take this as an opportunity to increase our positioning. This is in light of the house view that the USD should consolidate and trade sideways in the near term.

Bond yields are still artificially suppressed by structural factors and expectations for interest rates and inflation are rising (detrimental to fixed income). To mitigate some of the risk associated with these trends, in our Defensive and Low-risk profiles, a proportion of corporate bonds have been sold in favour of convertibles (these act conversely to standard fixed income instruments). In our High-risk profiles, developed government bond exposure has been brought down to zero.

We maintain a positive outlook on EM debt; investor sentiment is positive whilst fundamentals remain supportive for the majority of emerging countries, with GDP growth picking up and inflation under control. Moreover, this asset class still offers some yield; hard currency sovereigns, for example, offer a yield-to-worst of 5.25%.

All in all, fundamentally speaking, equities are still in a “Goldilocks” period for now. However, the current cycle is in its final stages and will be more sensitive to shifts in expectations for inflation and interest-rate increases going forward. This means that the smooth journey enjoyed by equity investors in 2017 is in the rear-view mirror and we can expect a rockier road from here on out, albeit with opportunities still to be had. 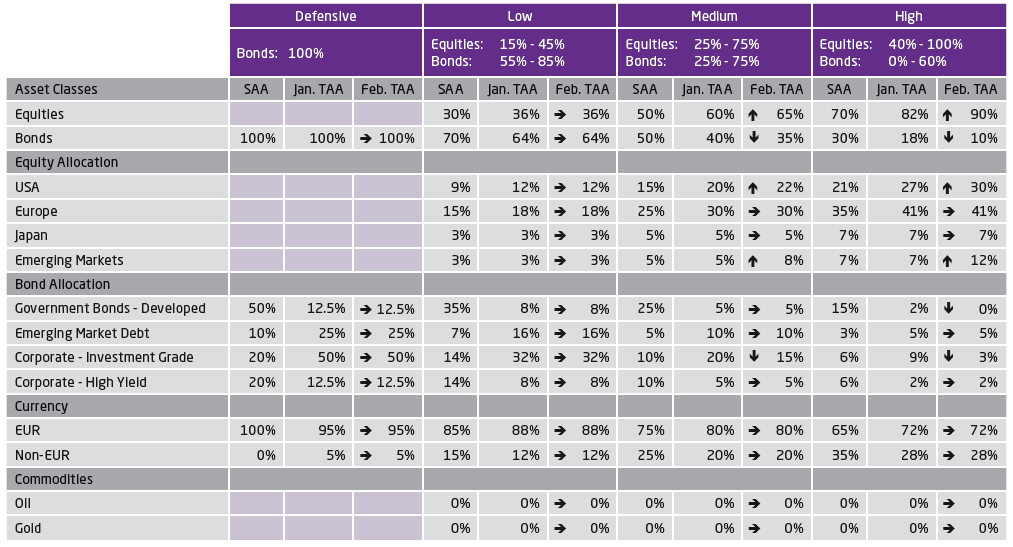