According to a new Fed model, US inflation – which was initially a by-product of global supply-chain issues – is now largely driven by heightened demand. This has implications for monetary policy, galvanising the case  for “higher for longer”.

US CPI continued its downward journey in November with the headline falling from 7.7% YoY, to 7.1%, below expectations of 7.3%. While this a welcome development, and quite a bit below June’s peak of 9.1%, we cannot forget that prices are still growing at a speed that is triple the Fed’s desired pace of 2%. The Fed’s preferred inflation measure, the personal consumption expenditure price (PCE) index, increased by 6% YoY in October (next print due December 23rd), again, down from a peak hit in June, of 7%.

No matter how you cut it, inflation is still too high. The Fed must continue to coax it down, but future actions must take into account what type of inflation it is dealing with. A new model developed by economists at the Federal Reserve Bank of San Francisco helps with this, by breaking inflation down into three categories: supply-driven, demand-driven and “ambiguous”, where it is not obvious given how difficult it is to disentangle the two.

Using this new model, it would appear that demand is taking over as the chief driver of US inflation. 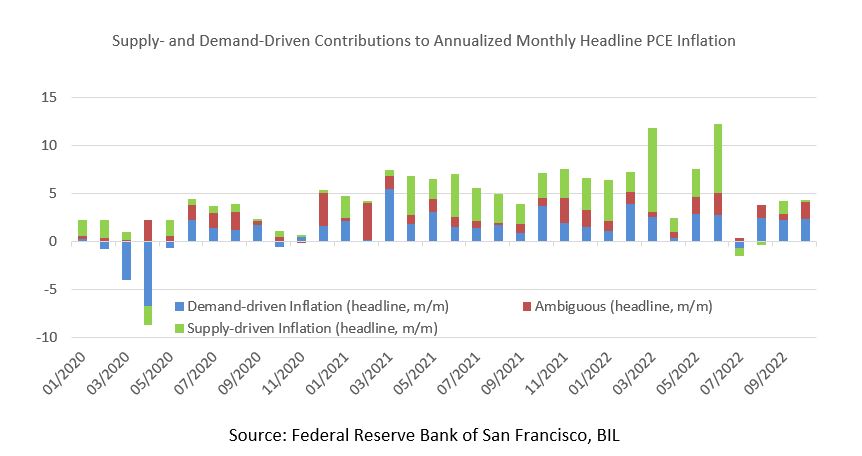 This has implications for the future pathway of monetary policy. If inflation was largely supply-side driven, this might imply a dovish Fed pivot was warranted – the Fed’s toolbox has a limited effect when it comes to resolving shortages of goods and materials and clearing supply chain congestion. Trying to use it to this end would probably result in overtightening in areas that didn’t actually require it while international supply chains normalised on their own accord.

However, if the bulk of inflation is stemming from heated demand, the Fed can tighten financial conditions to the end that there is less money sloshing around in the system to be spent.

Looking into the November data, indeed, inflation seems to be concentrated in the services sector (+6.8% YoY from 6.7%), where demand is still strong with people eager to catch up on missed experiences. Airfares, for example, are still growing at a clip of 36%. Admissions to movie theatres and concerts at 7.4%. Shelter (+7.1%), a category strongly linked to the strength of the labour market, plays a big role on the demand-driven side, in part just because of its outsized weight in monthly household budgets.

For demand-driven inflation to keep coming down we need to see the pillars holding up consumption weaken. The first – pandemic-era excess savings – are gradually declining, now estimated to have fallen to less than half of the initial $2.3 trillion amassed during lockdowns. The second pillar supporting spending is the labour market. So far, it has remained resilient in the face of tightening and upwards pressure on wages is very much present. November payrolls grew by 263k versus 200k expected, and average hourly earnings were up  5.1% YoY, also well above the 4.6% expectation, leading Fitch Ratings chief economist Brian Coulton to declare, ‘The Fed is tightening monetary policy but somebody forgot to tell the labour market’. Indeed, there are 1.7 jobs for every unemployed worker: Prior to the pandemic this rate was steady at about  1.2.

This is where the Fed can have greater influence and indeed, officials have acknowledged that getting inflation under control will require a sustained period of low growth as well as higher unemployment. This likely supports the case for a more prolonged tightening campaign. We see the terminal rate settling around 5%, implying rates will continue to rise at least through March. From there, we expect they will stay “higher for longer”. Will this result in recession? It looks likely. However, with the US economy still quite strong, particularly the labour market, we believe a downturn in 2023 will be short, shallow, and potentially even necessary in order to bring about some moderate demand destruction.