On Wednesday, data showed that US inflation continued to heat up in December. The year-on-year change in headline prices was the most elevated since 1982 (at +7.0%), and the highest since 1991 for the core index (+5.5%), which excludes volatile components such as food and energy. Gains were primarily driven by core goods with continued upside in used car prices (up 3.5% from the previous month, and nearly 40% from a year ago), new car prices (+1.0%) and clothing (+1.7%).

With Americans having lived with inflation above 5% for seven months now, and with some analysts arguing that the Fed is behind the curve, this latest print supports earlier and faster Fed rate hikes, potentially followed by an unwinding of its $8.8 trillion balance sheet. 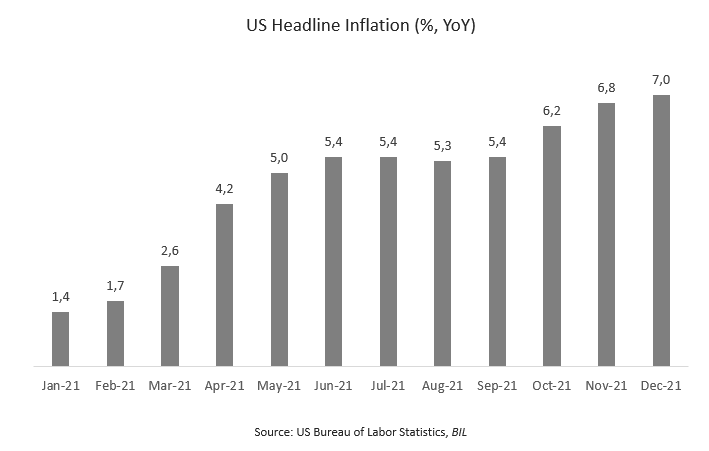 However, the Fed has a dual mandate and must balance its symmetrical 2% inflation target with its quest to achieve maximum employment. If it acts too aggressively, it could choke off growth and deter companies from hiring.

While the unemployment rate has plummeted to 3.9% (below the Fed’s 4% long-run rate), there are still 3.6 million fewer workers in the US than before the pandemic. Americans have left the labour force in hoards in what some have coined “The Great Resignation” (if you are not in the labour force and not looking for work, you’re not included in the unemployment rate calculation). The problem is, a large share of the potential workforce isn’t applying to jobs. Many would-be workers have filed for early retirement, remain fearful of the virus, are caring for children at home or have re-evaluated their priorities in terms of work, life and purpose. This is not  to mention the self-employed and the new digital economy made up of influencers and creators monetizing their ‘skills’ or ‘brands’ online and outside of payroll data: In 2021, TikTok surpassed Google in terms of internet traffic!

All this has resulted in intense competition amongst companies for a smaller pool of workers, putting upwards pressure on wages. Average hourly wages rose 4.7% in December from a year earlier, well above the roughly 3% average increase before the pandemic. While most of these increases had been concentrated in contact-intensive, low-paid jobs like hospitality, wage pressures are beginning to broaden out, posing the risk that inflation becomes “entrenched”.

Fed Chair Jerome Powell has warned that entrenched inflation could jeopardise the economic recovery and noted that “to get the very strong labour market we want with high participation, it is going to take a long expansion… to get a long expansion, we are going to need price stability. ” He added, “high inflation is a severe threat to achieving maximum employment and to achieve the long expansion that could give us that.”

It is becoming crucial that the Fed anchors inflation expectations as they tend to translate into higher actual inflation. Tapering of the central bank’s bond buying is essentially old news. At the December FOMC, acknowledging that its inflation mandate had been satisfied and that the “risk of higher inflation becoming entrenched has increased”, the Fed announced that it would double its pace of tapering from $15bn to $30bn per month, indicating that asset purchases should draw to a close completely by mid-March. At the same time, rate hikes are now aggressively priced in the market, with economists generally expecting the Fed to raise interest rates in March, with two or three more hikes later in the year.

An additional tool that has been brought to the drawing board is quantitative tightening (QT) – i.e. a reduction in its $8.8 trillion balance sheet. The minutes from the December FOMC mention:

“Some participants judged that a significant amount of balance sheet shrinkage could be appropriate over the normalization process, especially in light of abundant liquidity in money markets and elevated usage of the ON RRP[1] facility.” No details around the how and when of any potential QT have been released and for now, this seems to be posturing. Nonetheless, it caused a bout of market anxiety.

The last instance when the Fed managed to reduce its balance sheet substantially was from 2017 to 2019 with a total reduction of 15%. Looking at historical data we see that during this period the S&P 500 actually delivered almost 25% returns and bond indices also managed to deliver a decent performance. However, under the surface, this also pushed up the short-term funding rate and in September 2019, a shortage of cash in the system led to the repo market crisis. This time around, the Fed is comfortable to argue that its new Standing Repo Facility should help avert a repeat of the liquidity squeeze.

As of today, inflation and GDP growth are now much higher compared to 2017 (GDP: 5% vs 2.1%; inflation: 7% vs 1.7%) and the unemployment rate is similar, rendering quicker action on the Fed’s behalf intuitive. The big difference between now and then is the lingering participation rate, as well as the speed at which policy is changing. This time, the span between the beginning of tapering, the first rate hike and balance sheet reduction could be less than one year while in the past, it took years to fully normalize monetary policy.

The Fed Chair reassured markets this week, painting a picture of a soft landing, saying that the Fed can cool inflation without damaging labour market and by being “humble but a bit nimble”. The latest minutes mention that “Some participants commented that removing policy accommodation by relying more on balance sheet reduction and less on increases in the policy rate could help limit yield curve flattening during policy normalization”. However, the unprecedented speed of policy normalization could indeed catalyze higher volatility and style and sector considerations will become ever more crucial. The key takeaway is that the age of ultra-loose monetary policy is coming to an end and the investment landscape is set to become more demanding than it has been in the last few years.

[2] Where Influencer Marketing and the Creator Economy Are Headed in 2022 and Beyond | Inc.com