2022 was to be a year of strong economic growth. Supply chain disruptions would ameliorate. Consumers with unusually high savings rates would get busy addressing pent-up demand. Corporate profits would swell… Mid-May, this narrative is fast-deteriorating. Inflation sits stubbornly at multi-decade highs, geopolitical issues in Europe threaten the supply of essential raw materials, and risks to growth are rising as we stare down the barrel of tighter monetary policy hoping that central banks can orchestrate a soft landing for their respective economies.

In such a context, equities and bonds alike have undergone intense selling pressure. Simultaneously, the price of gold – typically considered a safe haven in times of turbulence and a hedge against inflation – retreated back to levels seen before the conflict in Ukraine, leaving some investors perplexed.

To analyze movements in the gold price, it is first important to understand that given its limited use in industry, gold’s value is largely driven by economic sentiment and the ebb and flow of demand. This of course means its price can be volatile. 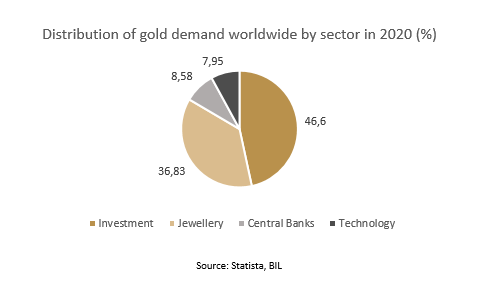 Broadly speaking, demand for gold tends to rise in times of stress or high uncertainty as investors exit riskier assets and seek out safer places to park their cash. Conversely, in times of relative calm when the economy is faring well, riskier assets like equities might outshine gold in terms of return potential. Gold demand also typically piques when inflation expectations are on an upward trajectory, with investors seeking protection from its corrosive effects on the value of fiat currencies or on bond coupons.

In today’s context, we may therefore question why gold has not rallied more, given heightened geopolitical risk and the fact that inflation is about four times central bank targets in both the US and the Eurozone.

What is key to keep in mind is that real rates are negatively correlated with gold. As central banks embark on policy normalization, inflation-adjusted yields on other “safer” assets like core Government bonds which were paltry or even negative at the beginning of the year, are becoming more attractive. This dims the shine of gold in a portfolio because bullion offers neither interest payments nor dividends.

The price of gold is also tied to the US dollar index, as it is a USD-dominated asset class. When the dollar rises (as it has been doing so lately against the backdrop of a more hawkish Fed), gold becomes more expensive in other currencies, which in turn, takes a toll on demand.

However, there may be another factor at play currently weighing on the gold price… an ongoing squeeze on leveraged investors. At the onset of the pandemic in March 2020, as is seen on the chart, gold registered a sharp decline, which again was surprising given that global capital markets were in disarray and the world was thrust into a state of panic. In retrospect, some analysts believe that the flight to safety was temporarily interrupted as gold fell victim to its status as a liquid asset: Investors facing margin calls in other asset classes were forced to sell their gold positions to cover them. It wasn’t until the Fed began pumping liquidity into the market that the gold price rebounded. A similar pattern played out following the crash of Lehman in 2008 that led to the global financial crisis: Gold initially slumped, viewed by investors as a rich source of cash, before going on to enter a multiyear bull market.

With the ongoing market turmoil, corroborated by a bloodbath in the cryptocurrency market, there is a chance that behind the scenes, the same is currently happening today. The key difference is that the Fed is firmly committed to a tightening cycle as it battles to prevent inflation from spiralling.

For investors, while gold boasts important functions as both a store of value and a diversifier, today’s price action highlights an important point: short-term price movements are often frustratingly difficult to predict and impacted by a confluence of factors, some more obvious than others.

Gold’s glitter really starts to become apparent when considered over a long-term investment horizon and when it is included inside a well-diversified multi-asset portfolio.