The Philosopher’s stone, the elixir of life, used for rejuvenation and perhaps even immortality… If such a talisman was to exist for the economy, it would most certainly lie with central banks (CB) who yield the most influence over the trajectory of the cycle. After pursuing quantitative tightening to prevent the major economies from overheating, CBs are now breathing life into the ageing cycle by adopting a decidedly more dovish approach to monetary policy.

At its March meeting, the Federal Reserve (Fed) doubled down on it dovish stance, unveiling a new dot-plot which eliminated the 2 rate hikes originally anticipated for 2019. It also announced plans to slow its balance sheet reduction programme in May, before bringing it to a complete close in September. A policy error by the Fed poses the single biggest risk to the continuation of the cycle –  as we have said before, economic cycles don’t die of old age – the most frequent contributors to modern recessions have been monetary policy tightening and oil price shocks. With the funds rate in a “broad range of neutral”, Chairman Powell has emphasised ‘patience’ before any further policy amendments, reducing the risk of recession, for another few quarters at least.

The European Central bank (ECB) has also pivoted towards a more accommodative stance in light of slowing growth and weak inflation. In March, it introduced a fresh TLTRO programme to provide banks with favourable loans. Unfortunately, the ECB doesn’t have much left in its policy jar should economic clouds continue to gather.

Dovish policy might not set equity markets on fire but it at least puts a floor under risk assets in the near-term. But with that said, markets are sceptical about how much CBs can shoulder alone and at some point, investors will have to see other risks subside (i.e. no deal Brexit avoided, trade war threats ease, declining economic data finds a bottom…). Otherwise, there is a danger that a negative feedback loop develops in investor confidence and recession fears stoke behaviours that in the end cause a recession.

With global growth becoming a headwind for the US economy, and as the glitter of fiscal stimulus wears off, the Fed has downgraded its growth expectations from 2.3% to 2.1% for the current year. However, underlying trends remain supportive (industrial production and  consumer confidence are running strong, whilst unemployment fell to 3.8% in February…). We thus remain optimistic about the domestic economy, albeit a shade less bullish than before.

As we predicted, the eurozone is failing to live up to expectations and fears that declining data won’t stabilise are taking hold. The flash composite PMI for the region slipped to 51.3 in March, contrary to expectations which predicted a rebound to 52. Germany – the EU’s growth locomotive – is causing real concern: manufacturing output fell for the third consecutive month in March, with factory orders deteriorating to the greatest extent since the height of the financial crisis in April 2009. A US clamp down on car imports, if it materialises, could be the straw that break the camel’s back.

Recent eurozone PMIs galvanised growth fears, causing the German 10-year yield to fall below zero for the first time since 2016, and the US yield curve to invert. Yield curve inversion is considered by some to be a harbinger of recession. However, though every US recession since 1962 has been preceded by an inversion, not every inversion has been followed by a recession, rendering the yield curve as an imperfect predictive tool. Even if it was a reliable signal, if history is a guide, recession would be at least 9 months away, and those 9 months normally see equities have a nice run.

Elsewhere, in China, data is still mixed but the central bank has a full armoire of policy tools that already seem to be having a somewhat positive effect.

At an interim Investment Committee earlier this month, after a rapid ascent in risk assets, we brought our equity positioning down to neutral, locking in gains. We still think that there are opportunities left to be had in equities – with support coming from subdued earnings expectations and easy policy – but believe that the current environment calls for some restraint in the deployment of risk budgets. For the same reason, we favour Growth, Quality and Momentum styles over Value and focus on Large-Cap, low-risk stocks.

In terms of regions, we give preference to the US where the economy seems to be soldiering on. Although it has the highest valuation in absolute terms, on a sector neutral basis the US is not more expensive than Europe and is not exposed to the same magnitude of risk factors. We stay neutral on Japan and Emerging Markets and underweight Europe. Our preferred sector for the moment is IT as it outperforms in terms of earnings growth expectations and offers economic resilience.

Our fixed income allocation stays constant. In higher risk profiles with more equities, we have built up a small exposure to government bonds as a buffer against stock market volatility – an inherent feature of the later stages of the cycle. In lower risk profiles, we give preference to investment grade (IG) bonds, particularly in Europe. All-time high corporate debt levels in the US, as well as high hedging costs for European investors, taint the attractiveness of US IG bonds, whereas the latest ECB actions are positive for European credits, with continued dovishness expected. We keep a sprinkling of Emerging Market (EM) Debt for additional yield: a more dovish Fed should give way to a softer dollar, which should give support to EMs. Rating trends in the high-yield bond space, have moved further downwards in the US whilst remaining at a negative level in Europe, rendering this asset class quite unattractive.

Fundamentals in the gold market are starting to become compelling, however, we believed it was premature to buy in at this stage. Gold tends to be quite illiquid and for the time being, we prefer to have dry powder that can be readily redeployed into the equity space should Q1 earnings season go well, or if macro data finds a floor.

To stick to the Philosopher’s Stone reference, the patient Fed seems to be taking a leaf out of Hagrid’s book, who famously said: ‘What’s comin’ will come and we’ll meet it when it does’. We likewise adopt a wait-and-see approach in our allocation. Whilst there may not be a Philosopher’s stone, let’s see if the global central bank collective can achieve a suitable alchemy of monetary policy tools and calibrated communication that keeps the cycle alive for longer. 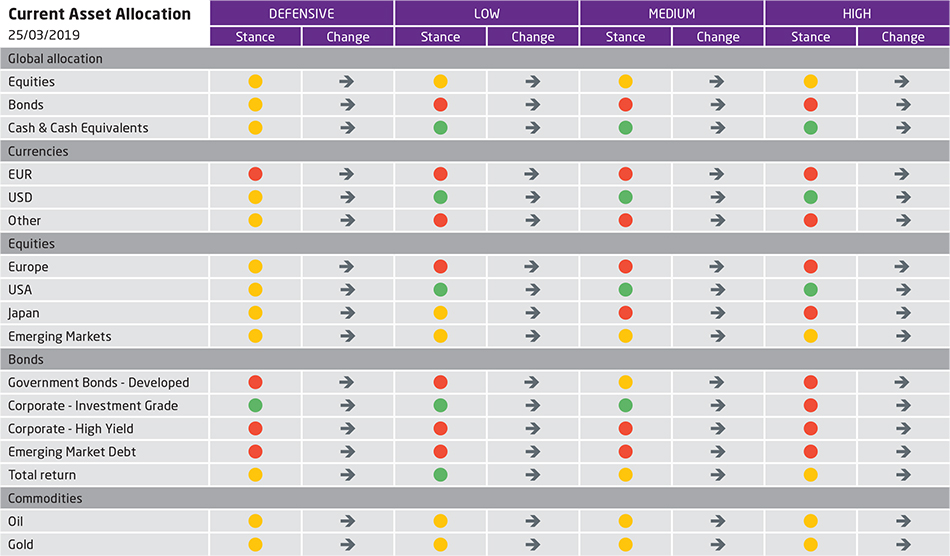 As economic conditions are subject to change, the information and opinions presented in this outlook are current only as of March 25th, 2019.