Today was supposed to be the day when the UK officially left the EU. But with the UK still unable to decide on  how to proceed, the EU has delayed the departure – but not by much…

Late Wednesday, it came to fruition that not one of the eight Brexit options which were subject to an indicative vote in the British Parliament was accepted. 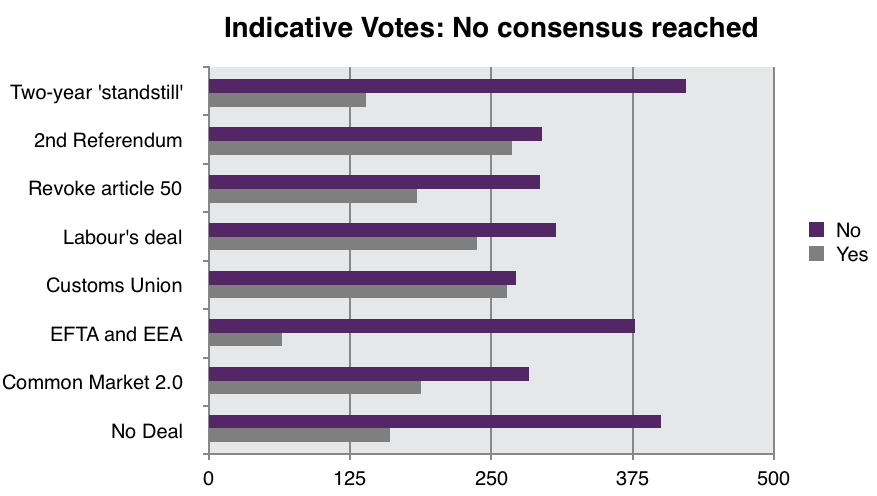 After the  stalemate, Theresa May will today between 9.30am and 2.30pm  hold a critical vote on the ‘withdrawal agreement’ section of her broader Brexit deal.  If MPs do not vote for the agreement, Britain will have only until April 12th  — the country’s deadline for triggering elections to the European Parliament — to choose between the remaining courses of action. Failure to choose a course of action could result in a no-deal Brexit on this day. If MPs do vote for the agreement, the EU will offer an extension until May 22nd in order for May to pass the implementing legislation in the UK.

May’s Brexit deal consists of two parts – the legally binding ‘withdrawal agreement’ (covering items such as citizens’ rights, Northern Ireland and the £39bn exit bill) and a ‘political declaration’ on the framework for future relations. May has already put her blueprint to a meaningful vote twice, suffering a heavy defeat both times. The House Speaker, Mr Bercrow said he would not permit a third MV on May’s deal, unless substantial changes are made. By excluding any decision on Britain’s future relations with the EU in Friday’s vote – focusing solely on the withdrawal agreement, May has ‘made the substantial changes’.

Theresa May has gone as far as gambling her position on this vote saying she will resign in Summer, if MPs vote in support. This was effective in winning the hearts and minds of some  hardcore Brexiteers in her own party. Indeed, Boris Johnson and Jacob Rees-Mogg were amongst 14 other Eurosceptic ‘switchers’. However, hopes have been dashed by the Democratic Unionist party (which props up May’s majority) who said it would continue to vote against her plan, regardless.

We continue to steer clear of the UK market, which is becoming somewhat of a casino. Sterling, a barometer of investor hopes and fears about the Brexit outcome has remained range bound over the past weeks, but at any point, with such a wide spectrum of outcomes, it could shoot in either direction. As the Financial Times put it: even seasoned market professionals are reluctant to predict which way it will jump. FX uncertainty is weighing on firms based in and operating in the UK who are struggling to model future cash flows and assess hedging needs. Renowned emerging markets fund manage Mark Mobius yesterday said the UK was becoming akin to an emerging market amidst the Brexit chaos.

Beside Brexit, the other major risk we face is the ongoing trade spat between the US and China. Yesterday, a new round of trade talks began in Beijing, attended by Trade Representative Robert Lighthizer and Treasury Secretary Steve Mnuchin. The chief Chinese envoy, Vice Premier Liu He, is due to visit Washington in early April for more talks. A “signing ceremony” summit between the two presidents is unlikely until the end of April at the earlies according to analysts. Trump delayed the March 1st deadline for imposing more tariffs, citing “substantial progress”. It seems this has removed some of the urgency to strike a deal.