The pandemic, through necessity, has fast-forwarded the onset of the fourth industrial revolution at a speed no one could have foreseen. In the not-too-distant future, many aspects of our lives will be digital, with distributed ledger technology, cloud-based infrastructures and the Internet of Things (IoT) all prominent.

Our new digital infrastructures will run not on oil, but primarily on data. The term “data is the new oil” has been circulating for a few years already, but now the proof is in the pudding. One of the most striking observations from 2020 (next to the oil price’s momentary drop into negative territory) comes from the fact that the market capitalisation of semi-conductor producers in the MSCI Word index extended largely beyond the market capitalisation of the energy sector (which includes the world’s largest oil producers). 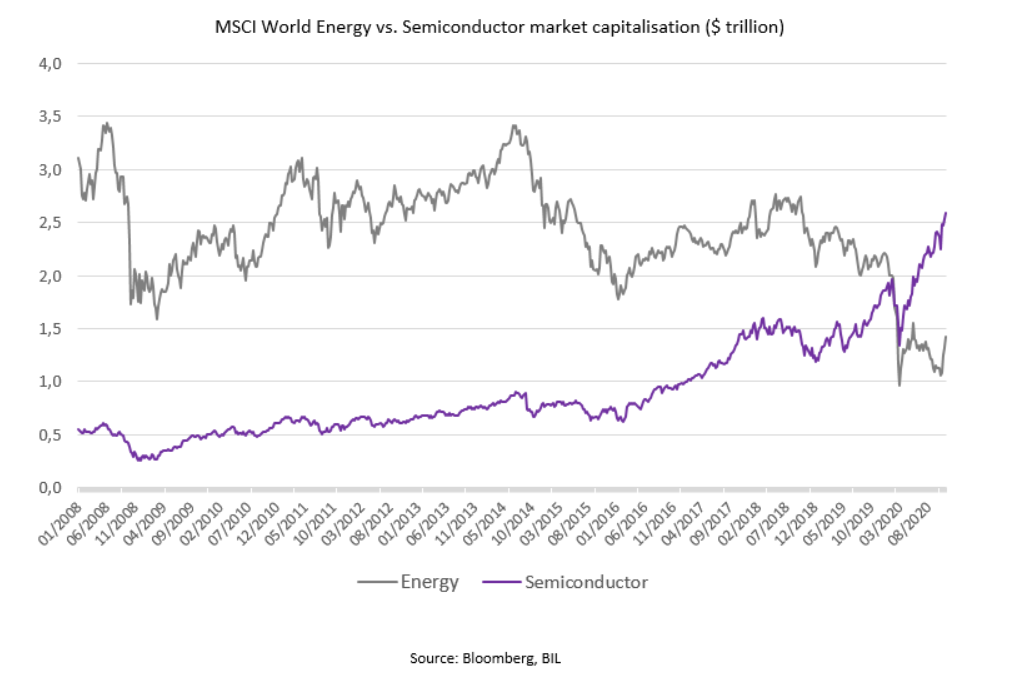 As humans, we generate data perpetually. Statista estimates that by 2025, there will be more than 75 billion IoT connected devices in use in what will resemble a vast nervous system, with the majority of these devices having the ability to track and store data.

Companies that effectively gather and analyze the abundance of data out there will have some of the most valuable market intelligence there has ever been. As the old adage goes, information is power, and companies are starting to act on this in almost every sector. Only recently, data giant S&P Global agreed to buy IHS Markit in 2020’s biggest merger worth some $44 billion in order to have a firm foothold in the increasingly competitive market in financial information to feed data-hungry algorithms.

Already, some of the most valuable companies in the world are actively harvesting and commodifying our data.  It is no coincidence that these companies also have strong market leadership. For example, Amazon churns large amounts of data to recommend products that it knows we are susceptible to buy. Social media giants collect data about almost every aspect of our lives – our location, what venues we attend, who we speak to, what our interests are, our political views… In turn, this means we can be targeted with ads that are likely to appeal to us.

Data gives these companies immense power and the opportunity to make a lot of money – two things that the oil majors enjoyed throughout much of the 20th century. But the similarities between data and oil don’t stop there. The oil that comes out the ground needs to be refined before it is useful. Data is abundant, but without proper analysis, it has limited use. As Peter Sondergaard of Gartner states, “information is the oil of the 21st century, and analytics is the combustion engine.” Data engineering will become essential as companies move away from diagnostic analytics which look at what happened, towards predictive and prescriptive analytics which pre-empt future behaviours and trends.

Further still, just like oil spillages, data leaks are increasingly problematic and while oil is causing the greenhouse effect in the Ozone, data is causing glasshouse problems on earth whereby sometimes it can feel like privacy no longer exists. As big data and analytics become crucial resources for both private and public enterprises, privacy and security concerns will also gain prominence. The spotlight will intensify on companies who do not navigate these concerns responsibly as part of their business model (the BP oil spill of 2010 comes to mind…).

In selecting the companies we wish to invest in, we are increasingly drilling down into the business models of individual companies to understand their intentions in the digitalisation space, across sectors. If companies are to become and remain competitive, data and analytics are increasingly indispensable assets, allowing firms insights that can accelerate innovation cycles, help them stay ahead of competitors and more acutely address consumer needs.