Yesterday, at its final FOMC of the year, the US Federal Reserve raised its benchmark policy rate by half a percentage point, to its highest level since 2007, and signalled its intention to keep tightening next year.

The committee voted unanimously to increase the federal funds rate to a target range of 4.25-4.5%, ending a string of bumper 75bp hikes.

Alongside the rate decision, the Fed published a revised “dot plot” of officials’ individual interest rate projections. The median estimate for the fed funds rate by the end of 2023 rose to 5.1%, up from 4.6% in September and quite a bit higher than the 4.8% terminal rate the market had priced ahead of the meeting. Powell added that he couldn’t say, “confidently that we won’t move up our estimate . . . again.” This will depend on incoming data.

No recession was mentioned but the refreshed economic projections envisage growth of just 0.5% in 2023 before a 1.6% expansion in 2024 as the unemployment rate tops out at 4.6%. The labour market continues to show resilience and Powell highlighted the “extremely tight” dynamics and the pressure higher wages would put on companies’ labour costs and ultimately inflation. Wages are currently growing at a pace of 5.1% YoY – about 2 percentage points quicker than Powell believes is consistent with bringing inflation back down towards 2%.

Bond markets initially declined on what was perceived as “tough love” from the Fed but then appeared to grow sceptical that the Fed will stick to its guns. In futures markets, bets are on that the Fed will cut rates next year as the economy slows, essentially disputing the dot-plot which did not show any cuts in 2023.

The Fed’s de-acceleration in the pace of hikes was followed across the Atlantic with both the BoE and ECB delivering 50bp hikes. Headline inflation appears to have peaked in all three regions, but concerns remain about how long it will take for it to come back towards their 2% targets, having seeped into stickier categories like rents and wages. 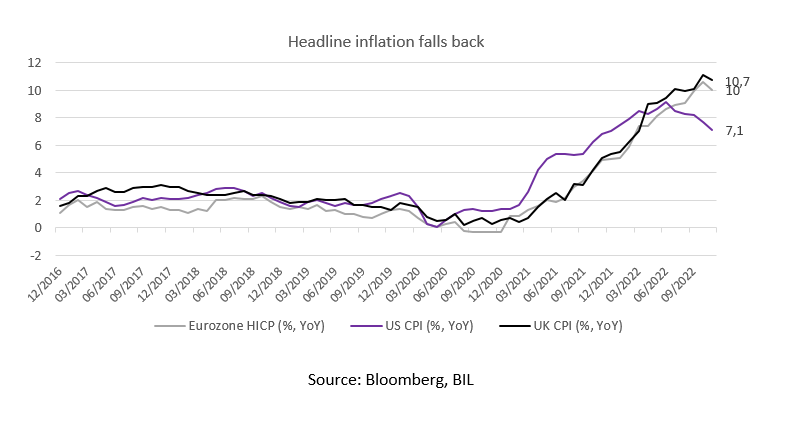