Treasury bond yields have been rising for the past few weeks based on hopes for tax reform and expectations of Federal Reserve (Fed) policy normalization through higher interest rates and balance sheet reduction (i.e. Quantitative Tightening (QT)). Further information surrounding the Fed’s intentions should be revealed at next week’s FOMC meeting which will kick-off on October 31st.

Whilst there are expectations of even higher yields to come and an end to the US bond bull market, one must consider that US economic activity has been slowing for some time. The Economic Cycle Research Institute leading indicator has been contracting in recent weeks and now stands at its lowest point of 2017. Yet the Fed has already raised rates four times and is on track for one more hike this year in addition to shrinking its balance sheet (QT). This is hardly a constructive backdrop for economic growth and higher inflation (i.e. rising yields). Moreover, inflation is elusive. In fact, (Personal Consumption Expenditure) PCE inflation, the Fed’s preferred measure, is decelerating: 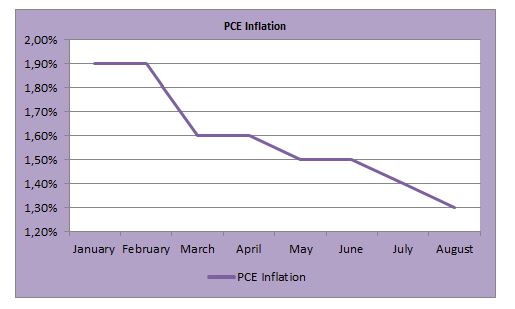 Thus, it seems the recent rise in Treasury yields does not reflect fundamentals and has more to do with shifts in market positioning, tax reform hopes and expectations around the Fed’s balance sheet reduction which will supposedly begin in the next few months. There are fears that such QT will lead to higher long-term rates. However, a look at history reveals a slightly different picture.

Banks, pension funds, insurance companies and foreign sovereign wealth funds showed up as buyers as the Fed stopped buying bonds: the Fed is not the only major player in town.

According to conventional wisdom Fed balance sheet reduction (QT) will eventually result in higher long-term yields. However, there is a good case to be made for the opposite to happen in the shorter term.

Firstly, QT is going to free up high quality collateral. Today, there are a lot of high-yield (junk) bonds swirling around, but there is a global shortage of high quality long-duration bonds. This means, once the Fed starts to unwind its balance sheet (i.e. selling bonds) there will be high demand for the new AAA-rated debt hitting the market.

Capital rules will ensure that banks move more Treasuries onto their balance sheets, especially at a time when consumer loan quality is deteriorating and delinquency rates are rising. Bank holding companies specializing in credit cards home loans, auto loans have seen delinquency rates (at least 30 days past due) rise to the highest levels since February 2011.

The most important aspect is that banks will be moving simultaneously towards bolstering their liquid asset ratio and will be shifting to replenish their depleted holdings of safe bonds. This expected strong demand from banks for Treasuries will not only keep long bond yields from rising, but will help push yields lower.

Moreover, 40% of the Fed’s balance sheet unwind is in mortgage-backed securities. This comes at a time when housing statistics show signs of late cycle strains. This will add to uncertainty in the real estate market, aggravate the slowdown in the credit sensitive segments of the economy, and continue to drive investor demand for safe havens with yield.

Against this backdrop, it is not unreasonable to conclude that initially QT could benefit Treasuries in the short to medium term, which are a hedge against weaker growth when the policy of boosting “consumer wealth”, increasing “confidence” and spurring “spending” unwinds.

Since the middle of 2015 the 10-year Treasury yield has been in a trading range between 2.0% and 2.4%. Given the fact the 10-year bond yield is closer to upper end of the trading range, we think there is some upside potential for the price of the 10-year bond from current levels, thus long-term Treasury holders should not immediately panic if next week, the Fed decides to push ahead with QT.