Once installed in the Oval Office, Joe Biden disbursed a $1.9 trillion fiscal stimulus package. Titled the “American Rescue Plan”, it was aimed at changing the course of the pandemic and providing immediate relief to American households, using measures such as a new round of stimulus cheques. He ramped up the country’s vaccination drive and now, almost three million vaccine doses are administered in the US daily. Biden recently announced that every adult in the country will be eligible to be vaccinated by April 19th, instead of his original deadline of May 1st.

Next on Biden’s agenda is a package geared towards rebuilding the economy. Biden’s proposed infrastructure package, “The American Jobs Plan”, worth some $2.25 trillion, aims to create millions of jobs while “rebuilding America’s crumbling infrastructure” over a period of eight years. Moody’s estimates that nearly 2.7 million jobs would be created by the plan.

The key areas for intended spending is broken down as follows:

$621bn for transport and infrastructure including: 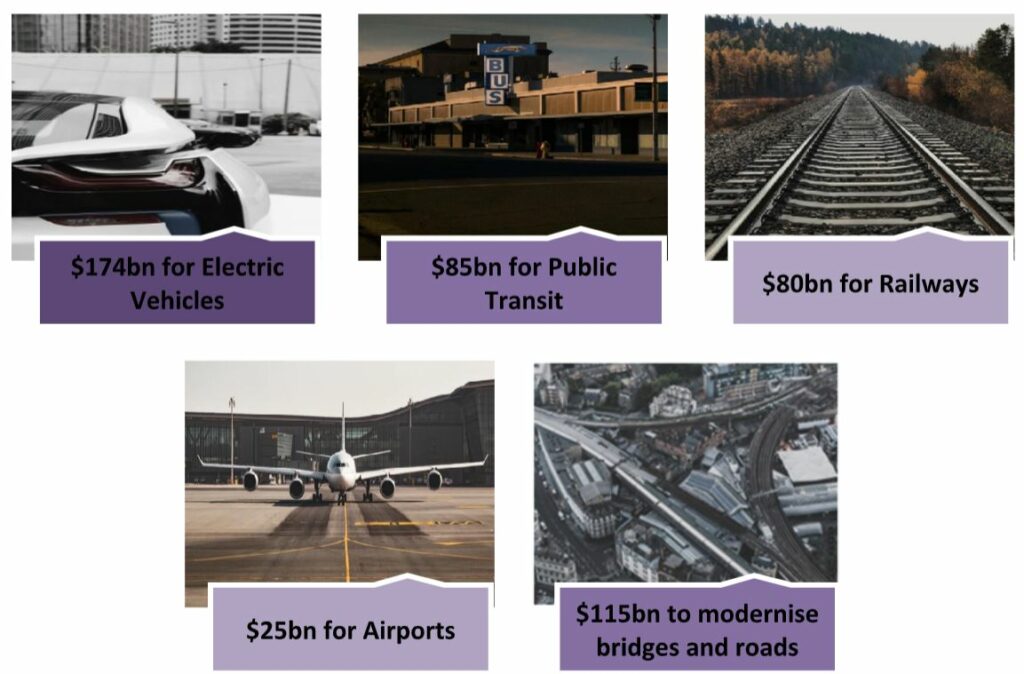 Over $650bn focused on improving quality of life including… 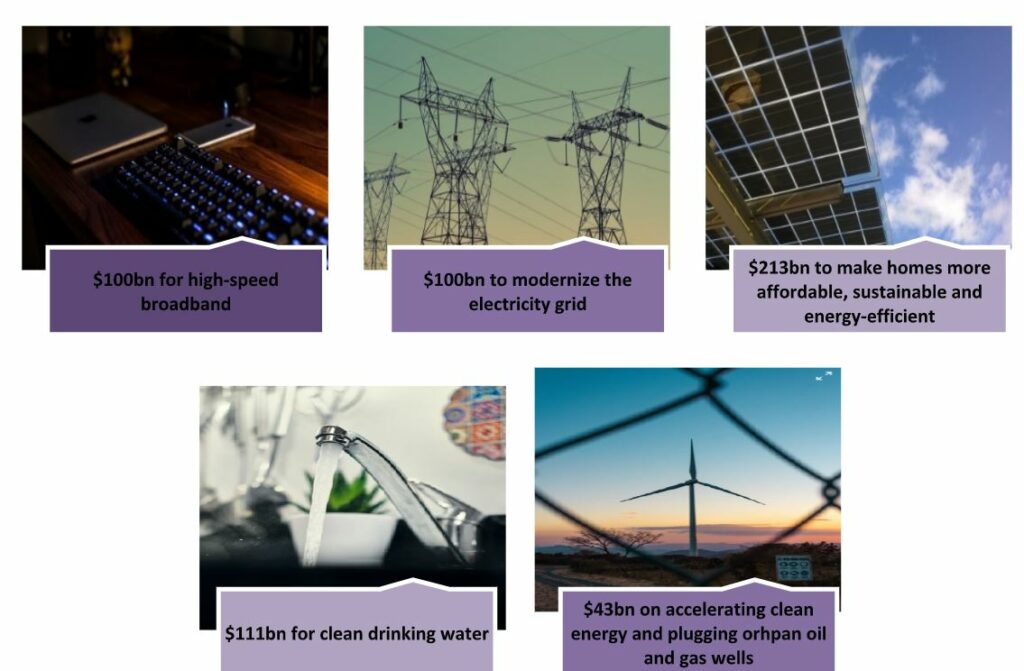 $480bn on manufacturing including:

In the fact sheet detailing the proposed Jobs plan, the Biden administration also notes that the health crisis has “unmasked the fragility” of the US caregiving infrastructure and “led to job losses and threatened economic security, eroding more than 30 years of progress in women’s labour force participation.” To address this, Biden wants to funnel $400 billion of the total $2.25 trillion towards improving access to quality, affordable home or community-based care. This would involve expanding a Medicaid program and would boost pay for care workers (who are largely female).

And Biden is not about to close the spending spigots there. According to reports, late-April, we might expect an additional spending proposal focused on social measures such as child tax credits, childcare, healthcare & education, which is expected to exceed $1tn. That spending would allegedly be paid for by tax increases on wealthy individuals.

How to pay for all this?

Together, the two proposed packages would total more than $3 trillion. With the US twin deficits already burgeoning (national debt stands at $28 trillion), the question is how to cover the costs? The proposals see the bill divided between corporations (roughly 2/3 of the total) and high income individuals (roughly 1/3), through higher taxes. For investors, corporate tax increases deserve greater consideration  given their potential impact on markets.

As part of a tax overhaul, among other measures, the Biden administration intends to:

If Biden’s tax proposals are passed, it is estimated that they will pay for the infrastructure plan in full within the next 15 years and reduce deficits thereafter.

Will the Republicans warm to tax hikes?

The elephant in the room is the Republican one: While there has traditionally been bipartisan support for infrastructure investment, it is not clear if the Republicans will agree to increasing taxes – noises coming from Capitol Hill suggest not.

Certain commentators have argued that raising taxes on American corporates could erode the international competitiveness of US firms and encourage them to relocate. Potentially countering this, Janet Yellen, the US Treasury secretary, has called on other countries to join Washington in setting a global minimum tax for firms. Yellen said she was working with G20 countries to agree on a global corporate minimum tax rate to end a “thirty-year race to the bottom on corporate tax rates”. On Tuesday, The European Commission backed Yellen’s call, but said its rate should be decided by the OECD.

The OECD has been drafting a two-pillar global taxation scheme for some time. The first pillar is intended to set a new regime for taxation of the largest multinationals (think tech giants like Google, Amazon and Facebook who make profits in countries where they do not hold a physical presence). To set the ball in motion with the OECD, the US has submitted its own  proposal that would see big firms pay levies to national governments based on their sales in each country. The second pillar aims to establish a global minimum tax rate, which could apply to all companies, not just digital ones, so that governments do not compete with each other to attract large multinational firms. European Commission spokesman Dan Ferrie said that it is hoped all G20 finance ministers agree on both pillars by this July (however, this has typically been an area where consensus among EU member states has been elusive).

Quite notably, the CEO of Amazon, Jeff Bezos has come out and said he is in support of a corporate tax hike stating, “We support the Biden Administration’s focus on making bold investments in American infrastructure.”

What if the Republicans still aren’t convinced?

The Democrats have only a thin majority in both chambers of Congress and the plan will be subject to political wrangling and adjustments to garner support – even among Democrats such as Senator Joe Manchin who believes a 25% rate would be more appropriate.

Without Republican support, Democrats could resort to using the budget reconciliation mechanism – the same procedure that was used to enact the American Rescue Plan. On Monday, the Senate parliamentarian paved the way for the Democrats to do so, allowing Democrats in the evenly split 50-50 chamber to rely on a 51-vote threshold to advance some bills, thus shielding them from a filibuster that requires 60 votes to overcome. However, the reconciliation only allows bills that raise the deficit within a 10-year window. In its current form, the legislation would add to the deficit beyond a 10-year window and therefore, adjustments would be necessary.

What does this mean for investors?

While the plan is likely to be tweaked and watered down as it traverses through Congress, we still expect that a substantial package is on the horizon. Already, the US economy is thriving amid economic re-engagement and an unprecedented symbiosis of monetary and fiscal support; so much so that the IMF just upgraded its growth forecast for the US economy by 1.3% to 6.4%. The Fed expects 6.5%.

As such, we are overweight US equities, focusing on companies that are exposed to the reopening and recovery narrative, primarily in more cyclical sectors (industrials, materials and consumer discretionary). We also like utilities, a sector in which we cherry-pick the names that will benefit from Biden’s green-tinged infrastructure package and which allow us to participate in the secular megatrend of sustainability. We have also implemented a value-tilt in our US equity allocation. Despite recent rotations from Growth stocks to Value, they still look cheap compared to history and should take sap from the anticipated economic upswing and a gradual uptick in rates.

While markets have been busy baking in the benefits of infrastructure spending, attention is yet to focus on the impact of a potential corporate tax hike. The IT, healthcare and communications sectors were among the key beneficiaries when Trump slid the knife through corporate tax rates and indeed, they may be the most vulnerable to increases.