What is GICS?
The Global Industry Classification Standard (GICS) is a standardized classification system for equities developed jointly by MSCI and Standard & Poor’s in 1999. The GICS methodology is used by the MSCI indexes, which include domestic and international stocks, and has become the de facto analysis framework across the professional investment management community for investment research, portfolio management and asset allocation. Approximately 95% of the world’s equity market capitalization is classified under GICS.

As of 28th September 2018, the GICS classification system which guides index compositions and asset allocation strategies globally, will be re-shuffled. Preliminary notifications[1] reveal that the most radical changes will pertain to the Telecommunications sector which will be broadened and re-named Communication Services.

At present, the Telecommunications sector has become a home of humdrum investments, drawing mainly risk-averse investors seeking bond-proxy stocks that offer a reliable dividend as an alternative to paltry yields in the fixed income world. Returns have been unexciting as a result of anemic growth and intense competition within the sector which has squeezed profit margins. A wave of consolidations has left only a handful of companies, representing only around 2% of the S&P500 index. Subsequently,  the sector’s overall performance is vulnerable to swings in any one of its constituent’s prices.

Plot twist. The sector is soon to be given a new lease of life, inheriting glittering names from the IT sector, like Facebook and Alphabet (Google’s parent company) as well as big media names like Netflix and Comcast which previously belonged to the Consumer Discretionary sector.

As a result of the Sector’s metamorphosis, it will contain two main industry groups: Telecommunication Services (made up of existing telecommunication names like AT&T) and a newly-minted Media & Entertainment group which will be divided into three sub-groups: Media, Entertainment and Interactive Media & Services (Appendix 1.1).

The new GICS structure will still consist of 11 Sectors, but as the below diagram depicts, the IT and Consumer Discretionary sectors will lose muscle which will mainly be re-distributed to the rejuvenated Communication Services sector. As a result it will come to represent roughly 10.2% of the S&P 500 index. 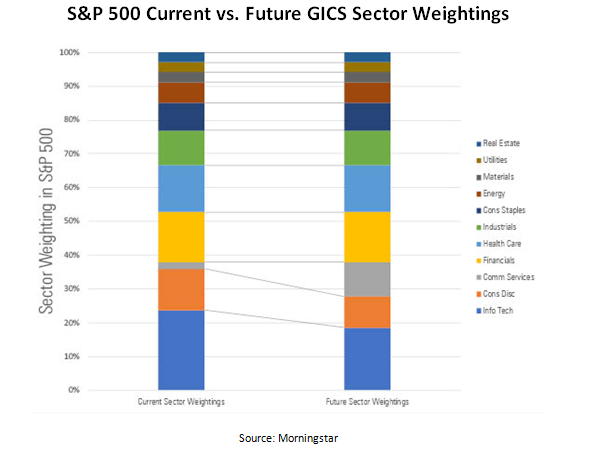 In light of the changes, there are several important considerations for investors.

In terms of sector allocation, investors will need to re-evaluate their preferred sectors and curate their portfolios accordingly. (Tele)communications is about to become a lot more relevant, housing a number of ‘stock market darlings’ from the IT sector; notably, three out of the four ‘FANG’ stocks – Facebook, Netflix and Google.[2]

In turn, the IT sector could lose its dominance (by the end of 2017, it accounted for 24% of the S&P 500) and some of its most prominent names that helped drive the laudable returns the sector has become known to produce. Likewise, stocks such as Comcast, TripAdvisor, Netflix (and potentially Walt Disney) that have boosted the performance of the Consumer Discretionary sector will switch into Communications services.

Investors in the bourgeoning exchange traded fund (ETF) industry will have to pay particular attention. The vast majority of ETFs are passively managed, meaning that the underlying indices guide trillions of dollars of investments worldwide, dictating what funds buy and sell. Thus, ETF investors should be aware that the basket of stocks which they currently invest in is subject to major changes, especially if their ETF tracks either the IT, Consumer Discretionary or Telecommunications sector. Rearrangements in the underlying holdings could drastically alter the risk, growth potential and income generation characteristics of the funds. So now, more than ever, it is essential that investors know exactly what is inside the funds they hold in order to have a grasp on future prospects.

Investors should also consider that track records for the sectors most heavily affected by the GICS re-classifications will become meaningless. Investors who place importance on past performance will miss the big picture and fail to understand what will drive performance moving forward.

Mutual fund investors in funds following a specific thematic may also wish to inquire as to whether this will alter the fund’s investment strategy.

Perhaps the most important conclusion is that Telecommunications should no longer be disregarded as bland. With a new injection of ‘cool’, this may be an up-and-coming sector to consider being in.

[1] Amazon’s new categorization is still to be announced