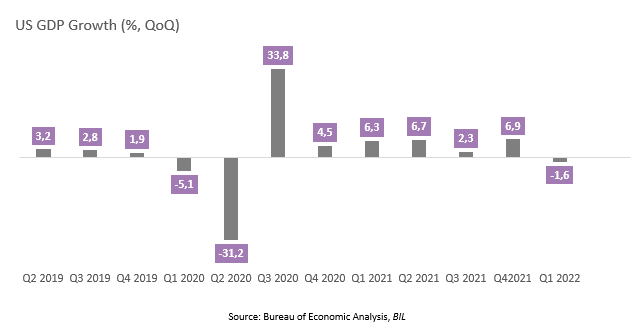 Today, the Bureau of Economic Analysis will release its preliminary estimate for US GDP growth in the second quarter of the year. The Atlanta Fed GDPNow tracker suggests we will see a contraction of 1.2%. After the -1.6%  recorded in Q1, by common definitions, this would mean that the US in in a  “technical recession”.

But is the US really in a recession? Ultimately, that’s for the National Bureau of Economic Research (NBER) Business Cycle Dating Committee to decide.

The NBER defines a recession as a significant decline in economic activity that is spread across the economy and lasts more than a few months. In its interpretation of this definition, it treats three criteria – depth, diffusion, and duration – as somewhat interchangeable.

In other words, the goal posts might move around a bit.

The first thing to highlight is that the contraction in Q1 was largely due to a jump in imports, which led net foreign trade to subtract a substantial chunk from GDP (3.2 pp) as wholesalers and retailers capitalised on easing supply constraints to rebuild inventories. Real inventories rose by a huge $150bn in Q1, but because this was smaller than the $193bn increase in Q4, 1.1 pp was clipped from the GDP figure. Imports of nominal non-oil goods rose at a staggering (and unsustainable) pace of 42% on an annualised basis, while exports rose by 6%. Meanwhile, consumer spending and fixed investment (which together make up over 80% of nominal GDP)—grew at a 3% real annualised rate, demonstrating solid, above-trend growth. Payroll employment grew at an even stronger 4.7% annualised.

The exceedingly strong labour market, which persisted into Q2, is the one aspect that really pushes back on the recession narrative. Fed Governor Waller has said that it is “inconceivable” to have a recession when unemployment has been at 3.6% for four months running. Treasury Secretary and former Fed Chair Janet Yellen has also noted labour market strength in downplaying recession fears, stating that 1.1 million jobs were created in Q2—an average of around 375k per month— more than three times more jobs created than in any 3-month period leading up to a recession. Rather, she states, “we’re in a period of transition in which growth is slowing and that’s necessary and appropriate and we need to be growing at a steady and sustainable pace.” 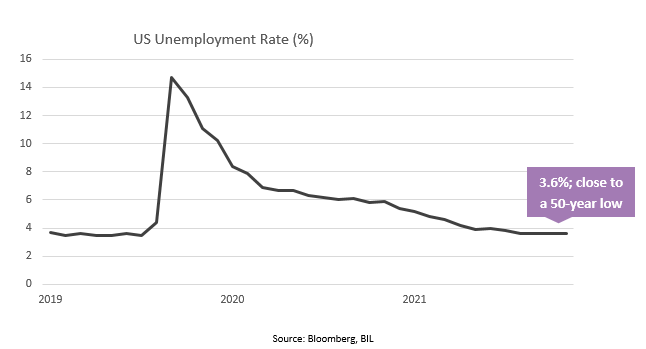 A final consideration is that the period of high and accelerating inflation we have had makes positive GDP growth much harder to achieve as the figure is reported in real terms (i.e. adjusted for inflation). Consumer spending data provides a good example of this. Adjusted for inflation, real retail sales have been negative for two consecutive months. In other words, US consumers are spending more money to buy less in volume/quantity.

Ahead of a potentially negative growth print, the White House posted a note on its website pushing back on the recession narrative, stating that data on the labour market, consumer and business spending, industrial production and income does not suggest that we are in a “true” recession (though of course there are likely political motivations behind this given the upcoming Midterm elections.)

From an investment standpoint, whatever the GDP print says, it is a backwards looking datapoint. Combining this with forward-looking equity market pricing is the tricky task and history shows that letting the former guide you in allocating to the latter is not usually a good way to proceed.

However, leading indicators such as PMI surveys suggest that the risk of a real recession is rising and we cannot rule that out.  Given the importance of consumption to the US economy, investors are more likely to look to  personal income and spending data and the PCE index, which will be released across Thursday and Friday, for more clues on the current health of the US economy.