Because of shortages, supply-chain disruptions, unprecedented stimulus and the subsequent unleashing of pent-up demand, the Covid-19 pandemic gave birth to unruly inflation that monetary guardians are struggling to bring under control. Since economies began to reopen, inflation has been disobedient in the face of central bank targets which sit around 2% in the US, the Eurozone and the UK. Rampant inflation threatens to spoil what has otherwise been a spectacular recovery that is still going strong, as it is eating away at purchasing power. Already, inflation is becoming a political issue. In the US, it is viewed as the single most significant issue for Americans and there is broad cross-party support for getting it under control. Here in Europe, a cost of living crisis is kicking in and governments have stepped in to shelter households from rising costs (largely related to energy).

While there is little central banks can do to reign in supply-side inflation (which is being stoked by geopolitical tensions that could result in shortages of critical raw materials), politicians and the public alike are looking at them to do what they can do on the demand side to bring inflation back under control – without choking off growth. 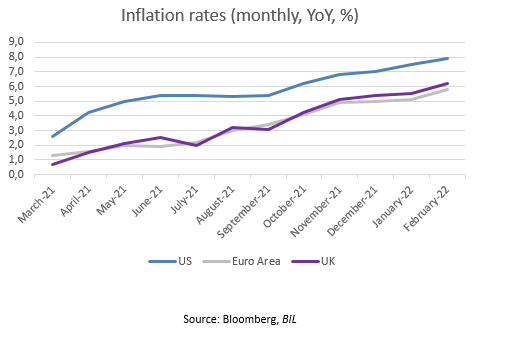 While the central banks in the regions mentioned above acknowledge inflation as a risk, they are taking different approaches when it comes to handling this problem child.

The Bank of England has been quick to act, bringing interest rates right back to where they were before the pandemic came into play at 0.75%, with the fourth rate hike of its tightening campaign pencilled in for May. With that said, it might now be shifting stance: While some weeks ago, it solely focused on price inflation, last week’s BoE meeting signalled a new focus on growth deflation. Higher commodity prices create both, and central banks have to choose which to prioritize.

Over the pond, after asserting that “transitory” inflation would come down of its own accord like a kid that tires itself out, the Fed had to intervene with “tough love” after realising its “laissez faire” approach was too risky with inflation starting to become entrenched. It then proceeded to wean the market off of QE (purchases of Treasuries and mortgage-backed securities have now ended), before raising interest rates for the first time since 2018 at its March FOMC by 0.25% to 0.50%, and signalling hikes at all six remaining meetings this year. The Chair, Jerome Powell, went further on Monday, pledging a 50 bps move if needed in May – a move the central bank has not made since 2000. His warning did not go unheard and money markets now see the Fed funds rate at around 3% by September 2023, compared to 2.1% priced in at the start of March. Digging into the dot-plot, FOMC predictions of where rates will move in the next few years is unusually wide, suggesting Fed officials are highly uncertain about the future. The next move to prevent inflation running a mock is probably to begin shrinking the central bank’s $9tn balance sheet.

The European Central Bank (ECB) is handling inflation with kid-gloves and at its March committee, conveyed that it was in no hurry to raise its record-low deposit rate even while it continues to unwind exceptional stimulus. When rate lift-off does begin, the ECB said the pace will be “gradual”. While the Euro Area has weathered the Omicron variant quite well and is in full recovery mode with unemployment at a record low (6.8%), its economy is more exposed to the armed conflict in Ukraine. Lagarde herself has cautioned that the ECB action will be “out of sync” with that of the Fed in the foreseeable future in light of this and also because of the fact that the EU and US economies were at different stages in the economic cycle before the war broke out. In all, we expect that geopolitical tensions will delay rather derail the ECB’s policy normalisation plans.

For investors, they key message is that the central bank comfort blanket is really being taken away this time, whether it be sooner or later. The question now is whether central banks can do so without causing a tantrum on markets or a hard-landing for the economy. In the US, Jerome Powell has pushed back on concerns that paring back policy support would cause a recession, citing episodes in 1965, 1984 and 1994 when the Fed slowed an overheated economy without prompting a sharp contraction. While equities have taken the Fed’s tough love in their stride so far, its hawkish tone continues to drive the US yield curve flatter and the dollar higher; we might expect this to continue over the coming months.

In their portfolio construction, investors should consider the differing paces of policy normalisation. For example, the growing divergence between a more aggressive Fed and a more cautious ECB is widening the gap between US and German sovereign yields, and will also have implications at the style and sector level. As an example of how we are acting on the latter, we recently decided to bring our exposure to European Financials down to neutral while adding to our overweight stance on US Financials. When rates do start rising, Financials, particularly banks, will let out a collective sigh of relief after years of suppressed yields that pressured their operating model. The ECB’s gentler pace (not to mention the greater exposure that European banks have to the Russian market) could hold back this segment in the near-term. However, it could also benefit other sectors that typically thrive in an environment of rising inflation like Energy and Materials.