Whilst markets were fixated on the French elections, Italy’s economic and political problems continued simmering. Italy’s public and private sectors are beleaguered by debt and soon Italy’s banks may require fresh capital injections. The debt problem is difficult to swallow in isolation, but there are new risks on the horizon: the country faces general elections in 2018 and the European Central Bank is, at the same time, likely to be underway with some sort of tapering of their Quantitative Easing program – an act which will hurt weaker EU economies, Italy included, the most.

Italy is not latching on to the upturn in global economic growth that many other countries have been enjoying. The IMF predicts that the 19-nation Eurozone will grow by 1.7% this year and 1.6% in 2018, yet they expect Italy to grow by only 0.8% both this year and next.

This sluggish growth, alongside consistent ‘fiscal slippage’ and high government debt levels, compelled the rating agency, Fitch, to cut Italy’s sovereign rating to ‘BBB’ (which is the last notch before being considered ‘junk’) in April 2017. The implication of the rate cut is that it increases the pricing pressure on Italy’s debt… 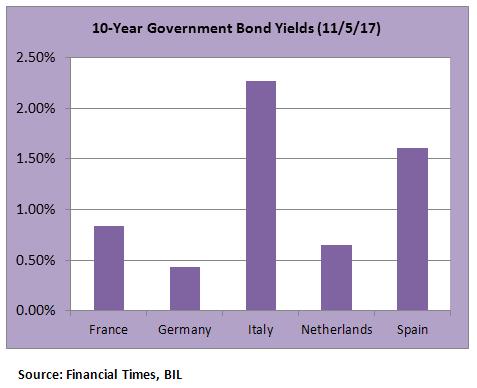 Italy’s leaning tower of public debt sits at 132.6% (some €2100 billion (bn)) of gross domestic product; this is the highest ratio in the Eurozone, after Greece. Italy has more sovereign bonds outstanding than any other Eurozone country and the higher yields go, the more Italy must cough up to bond-holders to service its debt. If perceived risk continues to push yields higher, Italy will become even more entrenched in a circle of debt as more cash is siphoned into debt-servicing, away from wealth-creating activities and investment that could stimulate economic growth. The OECD finds that low levels of public investment, weak innovation and low knowledge-based capital investment are main factors holding back growth in Italy.

One such risk that will push yields higher is tapering of the ECB’s €60 Bn per month bond-buying program, which could begin in January 2018. So far, the ECB has purchased €256 bn worth of Italian government debt, keeping prices high and yields low. There is not sufficient appetite in markets to keep prices elevated after the ECB support diminishes. 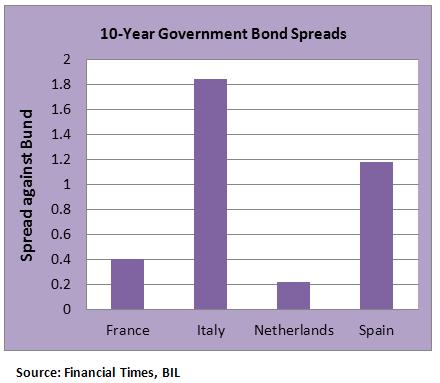 Political risk could also put pressure on yields; Italy will have to hold a general election before May 2018. The news distributor Bloomberg comments that the election is unlikely to produce a clear winner and the euro-sceptic Five Star party might gain enough support to form a coalition with the fiercely anti-euro Northern League. Nonetheless, Matteo Renzi, who is a staunch advocate of reforms, has been re-appointed as the Democratic Party (PD) leader and is back in the running.

In the Financial Times’ 2017 Eurozone economists’ survey, it was noted that the most pressing outstanding reform in the Eurozone was the stock of non-performing loans (NPL) within Italy’s banking system. The problem is so pervasive, that Italy’s banking sector is anchoring the country’s recovery. Some observers estimate that the European Banking system has just below €1 trillion worth of NPLs. Italy’s banking system is exposed to more than €300 bn. If Italian banks fail to clean up their balance sheets, the likelihood that they will need capital injections to survive could increase. However, it seems unlikely that more capital calls by the Italian banking system can be supported without any structural changes.

The OECD states that whilst the government has made significant progress on tackling structural impediments to growth and productivity, Italy must restructure the banking sector to improve governance, raise efficiency, and induce banks to dispose of bad debts so they can restart lending to firms. Innovative start-ups and small-medium enterprises are suffering from reduced access to bank and equity finance.

Italy has initiated a scheme called ‘GACS’ to encourage private investors to invest in packaged loans made up of NPLs by providing a guarantee for the least risky debt. However, uptake has been weak, unlike in Spain and Ireland where non-performing house loans have been successfully packaged and sold to investors. As the think-tank Bruegel points out, in a telling contrast, Spain started cleaning up its banks in 2012 and has enjoyed comparatively dynamic growth since. Spain and Ireland have both benefited from government intervention and the formation of ‘bad banks’ to house all bad debts under one roof. In Italy, no ‘bad bank’ has been established and a lot of hope rests on the ECB and EU to address any NPLs. According to the Bank of Italy, changes to bankruptcy law could help to reduce non-performing loan recovery times significantly.

Other recommendations that the OECD prescribes are;

a better-functioning public administration and judiciary system; a continuation of the implementation of the Jobs Act (a new system of active labour market policies), as well as better training and education to support the encounter between supply and demand in the job market.

Whilst there is no panacea for Italy’s woes, the best case scenario at present, is that the current Prime Minister Paolo Gentiloni tries to implement OECD reforms, before 2018 arrives bearing great risk. This could curb investor pessimism and prevent yields climbing upwards.

Perhaps this is the turning point where Italy, faced with pressure from the markets and from the ECB, will enact deep-seated structural reforms, as its Eurozone counterparts have already done. It seems this will be inevitable if Italy wishes to have a place amongst ‘core’ countries in a potential new two-speed Europe, pursuing goals such as banking and fiscal convergence, as they have stated.

The President of the European Commission, Jean-Claude Juncker states “I don’t think that one should expect that the problems of the Italian banks should be viewed as unsolvable problems”. Indeed, whilst some smaller banks may crumble under the pressure, we expect that in the longer term, some strong, key players could emerge in Italy’s banking sector.