The underlying message since our last bulletin on Q2 earnings remains the same: Corporate America’s collective bottom line is proving to be in great shape, as Republican tax cuts stoke the economy. Up until now, most S&P 500 companies have not yet felt a significant negative impact resulting from trade tariffs. This bodes well for our tactical allocation which is overweight US equities, focused on Energy, Financials and IT.

To date, 53% of the companies in the S&P 500 have reported actual results for Q2 2018. 83% of those have reported have recorded a positive EPS surprise – if this is the final number, it will mark the highest percentage since FactSet began tracking this metric in Q3 2008.

All 11 sectors are reporting positive year-on-year earnings growth and in 8 of these, the pace has hit double-digits. The Energy sector is enjoying the strongest earnings growth (+124.3% year-on-year) as a results of a ballooning oil price as well as the fact that earnings were unusually low in Q2 2017.[1]  The Materials, Telecom Services, and IT sectors also enjoyed strong earnings growth.

For Q2 2018, the blended earnings growth rate (which combines reported results with estimated results for companies who have not yet reported) for the S&P 500 is 21.3%. This is higher than the 19.9% estimate reported 2 weeks ago when the earnings season was in its early days.

As we highlighted earlier in the year, top line growth – a figure that isn’t skewed by cost-cutting or buy-backs – has been and continues to be strong.

The blended, year-over-year sales growth rate for the second quarter is 9.3% and if this comes to fruition, this would mark the highest revenue growth since Q3 2011.

Looking at ahead, analysts currently project earnings growth to continue at a pace of around 20% through the remainder 2018, bolstering our hypothesis that we should see equity prices grind up further still on the back of the burgeoning US economy. Thereafter, consensus estimates foresee lower growth in the first half of 2019. 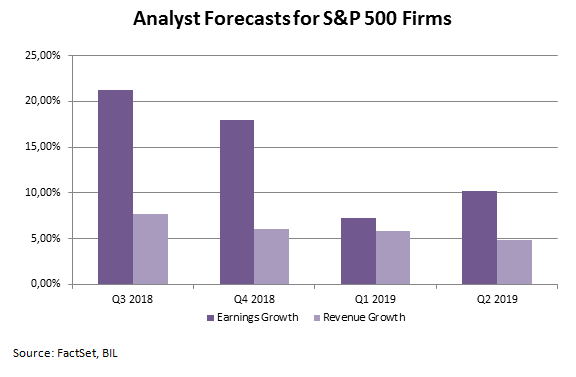 A well-documented risk for US corporates and a source of heightened market volatility is the ongoing trade spat between the US and key trading partners. From the onset we have resisted any urge to react to headlines and rather, we have stayed fixated upon hard data and fundamentals, managing risk based on known information rather than on threats (which at times did not materialise) and assumptions. This has proved to be beneficial thus far as we are seeing that tariffs have yet to have a tangible impact on US firms…

In order to try and assess the impact of trade tensions on American firms, FactSet scanned company earnings calls for any mention of the word ‘tariffs’. 70 companies discussed tariffs on their calls, but the majority of these (61%) saw little to no impact on their earnings in the second quarter or anticipated little to no impact in future quarters from tariffs. The Industrials sector has witnessed the highest number of companies (24) discussing “tariffs” on earnings calls.

Another notable phenomenon this earnings season has been the disparity in results within the Tech sector, with select names suffering from heavy outflows. Earnings from the so-called FAANG collective (Facebook, Apple, Amazon, Netflix and Google), have elicited the most market reaction, even as most of the companies in the group topped forecasts. Whilst one or two of our Tech picks were hit by negative outflows following their earnings delivery, our diversified allocation within the sector meant that overall, our sectoral allocation has had a positive earnings season thus far.

Facebook outpaced earnings estimates by 2 cents per share and narrowly missed on revenue. However, investors were spooked by the company’s warning about increasing costs and the stock lost a record $119 billion from its market value. Netflix too, was hit hard by weaker subscriber numbers and the prospect of rising costs, even as earnings beat estimates by 6 cents per share and revenues grew.

On the other hand, Amazon leapt over its second quarter estimate with earnings, as did Alphabet (Google’s parent company).  All eyes are now on Apple which will report Tuesday.

If analyst predictions are accurate, 2018 is poised to be a fine vintage in terms of earnings and our portfolios are heavily tilted towards US equities in order to benefit from strong earnings whilst they persist. Not only are earnings themselves key, but also how the market reacts to them. Fortunately for our tactical bets, FactSet finds that the market is rewarding positive earnings surprises more than average and punishing negative earnings surprises less than average at the moment. During the upcoming week, 140 S&P 500 companies are scheduled to report results for the second quarter.