2021 is the year when inflation came out of a prolonged slumber. It wasn’t a slow, gradual awakening: It was an energized, caffeinated upsurge of 6% or beyond, whether one be standing in Berlin, Washington, Moscow or Brasilia. Central banks assured us it would be fleeting – a quick espresso shot of inflation in a post-pandemic context. However, price pressures are proving to be more persistent while broadening out; this is leading some to concede that the steaming hot inflationary brew in their hands looks more like a caffè lungo.

The US Federal Reserve has dropped “transitory” from its inflation vocabulary, the Bank of Canada no longer refers to “temporary” forces pushing up prices, the Bank of England sees inflation “comfortably” above 5% next year and even Luis de Guindos, Vice President of the more dovishly-inclined ECB, this week warned that inflation will not go down as quickly and as much as the central bank predicted.

Economists and central banks, short of crystal balls, the ability to read coffee grounds or any other such forms of divination, can only make educated guesses about the outlook based on trends in the underlying drivers.

Price pressures have been fueled by a blend of factors with some of the most pertinent being: exceedingly high demand as economies simultaneously recovered from the pandemic (which even healthy supply chains would have struggled to satisfy), shortages (of labour, raw materials and certain components like semi-conductors), supply chain issues, elevated transportation costs and a global energy crunch.

The past fortnight has brought reassuring news on several of these parameters.

However, like the circular stain left behind by an over-filled coffee cup, high inflation amongst these temporary factors is starting to leave a mark on more permanent drivers of inflation such as labour costs. If this continues unchecked, the risk is that it could ignite a self-fulfilling feedback loop whereby elevated inflation expectations lead to higher actual inflation. If so, rather than cooling in 2022 as central banks hope, inflation could become too hot to handle, calling for aggressive rate hikes that would probably stop economic growth dead in its tracks.

As such, in places where inflation has been red-hot for several months already, central banks are acknowledging that they can no longer wait for it to come down on its own accord. Already, in the US for example, consumer sentiment has dropped to a 10-year low on concerns about price pressures, according to the University of Michigan’s November survey. To address inflation, the Federal Reserve will  now probably accelerate the pace at which it tapers it’s bond-buying program. A quicker taper will improve the Fed’s ability to anchor inflation expectations and give it more flexibility to hike rates earlier than previously expected, essentially leaving the door open for a first hike as early as spring 2022.

Here in Europe, as of now there is little evidence of wage pressures mounting, but dissenting voices are growing louder with regard to the ECB’s dovish policy stance. The central bank will end its Pandemic Emergency Purchase Program in spring, but it is highly conflicted as to whether an additional volume of asset purchases should be added on top of the existing €20bn/month of regular Asset Purchase Program purchases thereafter. 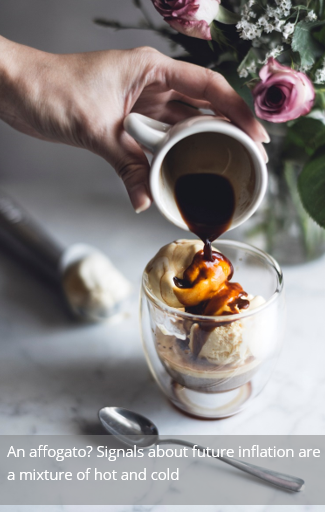 contemplating tighter policy. We still await full reports on the perceived danger of the new variant and the spectrum of potential outcomes is a wide one: Will Omicron dent demand and endanger the recovery – a scenario that would call for easier policies? Or, will it lead to new restrictions that exacerbate supply chain issues and stoke inflation further? This week, these kind of fears were in plain sight in the coffee market where futures prices reached decade highs: In an already-tight market, fear that Omicron would compel Vietnam, a key coffee exporter, to enact new restrictions led to a deluge of just-in-case orders which put a still-fragile supply chain under renewed pressure.

In all, signals about future inflation are a mixture of hot and cold. Next week’s central bank meetings (the US Federal Reserve on December 14-15, the Bank of England and the European Central Bank on December 16) are eagerly awaited by investors hoping for more clues as to how the new variant may affect the future policy pathway.

As to our view, early signs signal that the Omicron variant may not be as much of a threat as originally thought, but uncertainty remains high until we have the epidemiological facts. Should it not represent a major plot twist, we still believe that inflation will become more manageable in 2022 as energy demand retreats after winter, Christmas shopping is ticked as “done” on the to-do list, and the global supply chain is slowly pieced back together, with in some cases, shortages leading to gluts in the second half of 2022. This, in our opinion, will usher in some kind of decaffeinated inflation: weaker but still very much present.