Late on Wednesday evening, the Federal Reserve (Fed) published the minutes from its January meeting. The text  affirmed the central bank’s new “patient” approach to policy due to “various [downside] risks and uncertainties in the outlook.” In the aftermath of the government shutdown, faced with muted inflation and uncertainties with regards to the government budget, members decided that holding the federal funds rate steady “posed few risks at this point.” Previously, officials have worried that keeping rates low for too long would allow inflation and the economy to overheat. Patience was advocated in nine separate instances in the document, with the Fed emphasising its need for a clearer picture on developments related to international trade and economic conditions. However, the minutes did also remind observers that interest rate hikes could resume if the US economy remains on track.

With recent economic data being mixed at best, markets are ruling out the prospect of a further rate hike this year. However, over the longer term, we still believe in the strength of the US economy and our fixed income team’s view is that a rate hike in the second half of the year is not completely off the table.

Perhaps the most important message was concerned the normalisation of the Fed’s balance sheet. Market participants had high expectations, given the tone struck recently by Fed Members (e.g. Governor Lael Brainard’s interview with CNBC and earlier press releases mentioning “extensive deliberations”) that it would switch out of ‘auto-pilot’ mode with regards to quantitative tightening (QT). Policymakers seemed to favour leaving their balance sheet permanently bigger than is was in the past, but also seemed eager to announce normalisation end date rapidly and formerly.

“Almost all participants thought that it would be desirable to announce before too long a plan to stop reducing the Federal Reserve’s asset holdings later this year. Such an announcement would provide more certainty about the process for completing the normalization of the size of the Federal Reserve’s balance sheet.”

Under quantitative easing, the Fed’s balance sheet rose from $900bn in 2008 to $4.3tn by the end of 2014. It remained around this level until 2018 when the Fed embarked on quantitative tightening. Today, the Fed currently holds around $4 trillion in bonds. Following the Fed’s actions, our opinion is still that US rates should go higher from current levels but the risk of them going too high too fast has decreased. 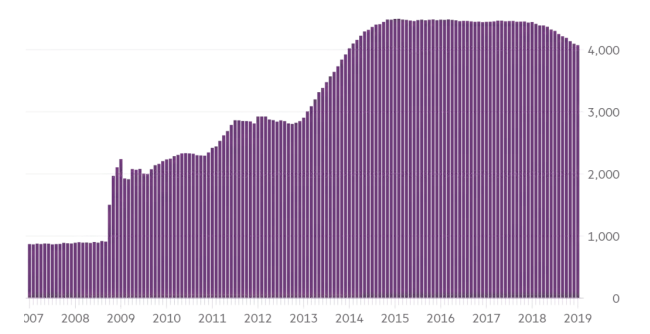 The minutes revealed extensive discussion about market conditions, particularly with regard to the impact that Fed actions have on the prices of risky assets such equities and corporate bonds. This can be taken as further evidence of the Fed’s pragmatism. A more dovish Fed bodes well for emerging markets, should reduce anxiety about tighter global liquidity, and should act as a support for equities.

Following the release, the market reaction was somewhat more muddled than usual with the S&P 500 closing 0.2% higher. A snowstorm in Washington prevented the usual proceedings whereby the Fed allows accredited press representatives to access the minutes ahead of the public release time, giving journalists time to prepare articles. This time, the Fed simply posted the minutes on his website and investors were initially left to their own devices to analyse the text.

For more on how the Fed’s and other central banks’ newfound dovishness affects our investment strategy, see our latest BILBoard ‘Central Banks change their tune’.