“We’re going to give the American people a huge tax cut for Christmas,” – President Trump

The Trump administration is attempting to have its widely-anticipated tax reform bill written into law at breakneck speed. One of the key features of the proposals is a reduction in the corporate tax rate to 20% in order to further stimulate the domestic economy. Given that this was a central tenet of Trump’s election campaign, the President is eager to deliver before the mid-term elections in 2018; especially given the Republicans’ weak legislative record to date.

In only fourteen days, Republicans in the House of Congress were able to write their version of the tax bill and pass it through the chamber. Also in the fast lane, the Senate has moved its version of the Tax Cuts and Jobs Act out of the Finance Committee in just seven days. By comparison, the last time the tax code was overhauled under the Reagan administration, the proceedings lasted two years. Now, the Republicans must have the companion legislation passed in the Senate; this will be a tough feat given that here they have a diluted majority of 52-48. Even if the Senate votes in favour of its version of the bill, the finished piece would then have to be reconciled with the House version and be approved again in both chambers.

At present, JP Morgan (JPM), the investment bank, calculates that markets are placing a 20-30% probability of the tax reform package being passed in the near-term, whilst their analysis attributes higher probability, given the velocity thus far. Should the reforms materialise, there could be several market implications which investors should consider…

From a macroeconomic perspective, the roll-out of the ~$1.5 trillion tax plan (provided it is not watered down by the Senate), should translate to stronger economic growth in 2018 than otherwise would have prevailed. The Federal Reserve (Fed) is already anticipating such outcomes and the minutes of its most recent monetary policy meeting revealed that “appreciable” increases in business investment to support growth were expected and that tax reform could boost capital expenditures. A few participants said the prospects for “significant” tax cuts had improved.

In the equity space, corporate tax cuts could trigger a rotation across style, sector, and size. Generally, tax reform should benefit domestic companies with a high effective tax rate (ETR) compared to US multinationals with significant overseas profits such as technology firms, pharmaceutical companies and consumer staples which generally already have a lower ETR. 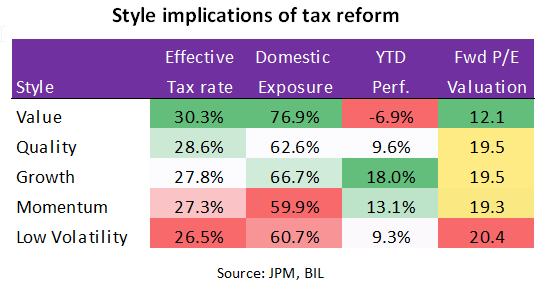 Because of this, tax cuts may act as a catalyst for a rotation from Growth into Value stocks (such as financial firms, especially regional banks) which currently carry the highest domestic revenues as well as the highest ETR: 30.3%. (For more information on this theme refer to a previous publication ‘Value: Back in Vogue’.)

Owing to a higher domestic exposure, it is also expected that US Small-Caps would see more of a silver lining than Large-Caps and already we have seen outperformance in anticipation of this – this week the Small-Caps Russell 2000 closed at a record high.

Contrarily, the stock of highly leveraged companies may take a hit under the proposals which intend to cap the interest deduction firms can make from tax returns at 30% of EBITDA1. If a company has a poor year, this cap would essentially come as further salt on its wounds; the decline in EBITDA would also decrease the amount of interest expense that the company could deduct. This is something that is also likely to have negative implications in the high-yield bond space where about one-third of companies would see their interest deductibility capped. For the most highly-leveraged companies, this could have a knock-on impact on earnings, financial metrics and could even potentially accelerate defaults

However, on aggregate, the reforms which have been proposed by the House should be a net positive for equities. Already, discussions are creating bouts of sentiment in prices, though the positive effects that reforms could bring are not yet baked into earnings forecasts. From the end of 2016 until present, the expected 2018 EPS growth for the S&P500 has only lifted by 2.7%, to its current level of 12.4%. JPM foresees that a corporate tax rate of 20% could add over 8% to this figure. If this comes to fruition, equity markets would see a huge boost. 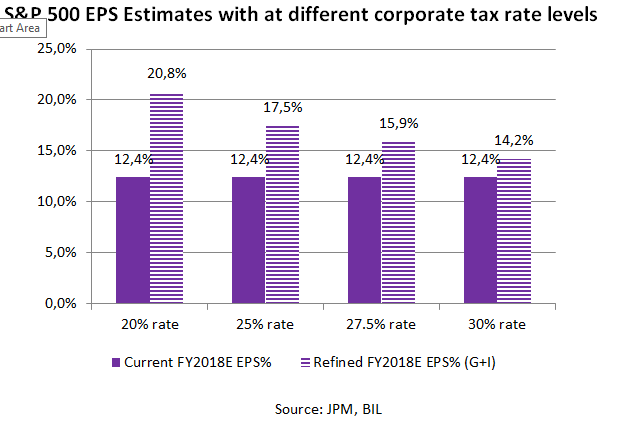 In the fixed income space, expectations around the tax reform package are already thought to be influencing the long-end of the yield curve. This is because companies are recognising that it is more economically efficient to front-load tax-deductible expenses now, rather than later, at a lower tax rate and in light of deduction caps. Pension contributions are one such deductible item and therefore, companies with under-funded pensions are taking the opportunity to act, and are loading up on 30-year Treasuries, keeping yields suppressed.

However, the devil is in the details and all of the above is subject to change if Trump cannot garner enough support within the Senate to have the plan passed in its intended state. In the short-term, hopes and expectations around tax reform are keeping stock market sentiment alive. Should the plans falter, a lot of momentum could fizzle away and the market is likely to be disappointed. For those brave enough to bet on the bill’s passage, against the market consensus, only time will tell is this is a case of ‘fortune favours the brave’.