Over the last decade, China has distinguished itself as a rising star of global innovation. Shenzhen, the country’s first special economic zone, has emerged as a leading global technology hub on par with Silicon Valley. China has birthed its own FAMG-equivalents, with Tencent and Alibaba now household names in many parts of the world. But it seems that China is only just getting started. The country has great ambitions, ambitions that are enshrined in government policy and which could shift the locus of innovation towards the East.

A marathon, not a sprint

There is a Chinese proverb ( 一口吃不成胖子 ) used to caution against impatience for success. Literally, it  translates as wanting “to get fat with only one bite”. In English we would say “learn to walk before you run.” China’s technological prowess has been decades in the making, the result of a marathon, not a sprint. Ever since the founding of the People’s Republic of China in 1949, science and innovation have been viewed as essential elements for growth. Since then, the country has worked astutely to put this policy priority into practice.

Initially, a crucial facet of Beijing’s strategy was the Torch program, an initiative of MOST (the Ministry of Science and Technology), that was approved by the State Council way back in 1988. It was designed to  exploit the advantages and potential of China’s scientific and technological strength and to create a favourable environment for high-tech industrial development. The program was key in grouping know-how, talent and capital in high-tech zones, including:

Now, many Chinese companies have advanced to the frontiers of science and technology across many sectors, especially in areas such as high-speed railways, telecommunications, e-commerce and mobile payments.

In relation to the latter, China is moving closer to rolling out the world’s first major sovereign digital currency. It has already begun minting its own digital currency and the People’s Bank of China has distributed more than 100m worth of digital renminbi to citizens. For the Lunar New Year 2021, authorities in several cities gave away tens of millions of renminbi as new year “red packets” that could be downloaded on to a smartphone. Coincidently, the creation of paper money can be traced back to China in the 7th century, during the Tang dynasty.

China is also emerging as global leader in the field of space exploration. The country opened the 2020s by bringing samples back from the moon and sending its first mission to Mars. This year, China launched the first part of a space station. The Tianhe (meaning “harmony of the heavens) module launch was the first of 11 missions that will add two more components and carry supplies and astronauts to the station before it becomes fully operational in 2022.[1] China hopes to end the decade by launching a spacecraft to Jupiter that could include a lander bound for Callisto.[2]

China’s rapid growth to become the top filer of international patent applications via WIPO underlines a long-term shift in the locus of innovation towards the East, with Asia-based applicants now accounting for more than half of all PCT applications – WIPO Director General, Francis Gurry

China filed 58,990 applications in 2019 via the WIPO’s Patent Cooperation Treaty (PCT) System, becoming the biggest user of the PCT System that helps incentivize and spread innovation. Until then, the US had held this position each year since the PCT began operating in 1978.[3] 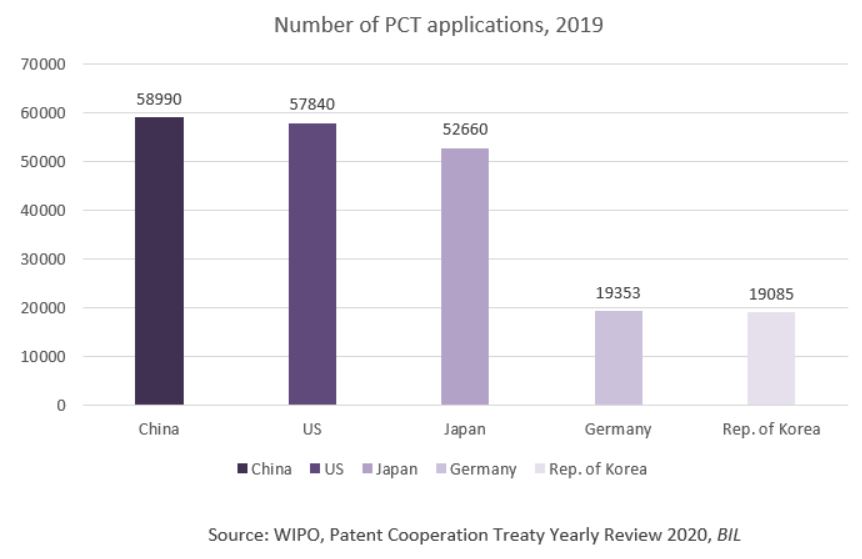 When looking in more granularity on a cluster-by-cluster basis, it emerges that the Greater Bay Area (Shenzhen-Hong Kong-Guangzhou cluster) filed 72,259 PCT applications in 2019 (6.9% of global PCT applications), while the San Jose-San Francisco cluster (Silicon Valley) filed 39,748 (3.8% of the global filings. [4]

Semiconductors lie at the heart of the modern economy in which China is poised to thrive. These are essentially the “brains” of modern electronics; key enablers behind a vast array of activities, from computing, to healthcare, to communication, to transportation. Current chip shortages are translating into production bottlenecks the world around and countries are now laser-focused on securing their supply chains.

Somewhat ironically, China’s semiconductor industry benefitted from trade tensions with the US. Previously, we saw a lot of Chinese tech companies relying on the US for these essential components. After Trump moved to sever links between US and Chinese firms, through necessity, the latter found alternative sources and doubled down on domestic capabilities.

Moving forward, China is set to build on the technological momentum it has already mustered as it accelerates its transformation into a major innovation hub. The latest Five Year Plan, unveiled this year,  shows that research and development spending will increase by more than 7% per year between 2021 and 2025. Seven key technological areas it aims to boost were highlighted: next-generation AI, quantum information, brain science, semiconductors, genetic research and biotechnology, clinical medicine and health, and deep space, deep sea and polar exploration [5].

Running in parallel with this is the Made in China 2025 strategy. In a nutshell, this is a blueprint for making China an advanced manufacturing economy, positioning it as a dominant player in the fourth industrial revolution by pursuing home-grown innovation. Made in China 2025 targets ten strategic industries that China wants to become globally competitive in by 2025 and globally dominant in before the close of the century. 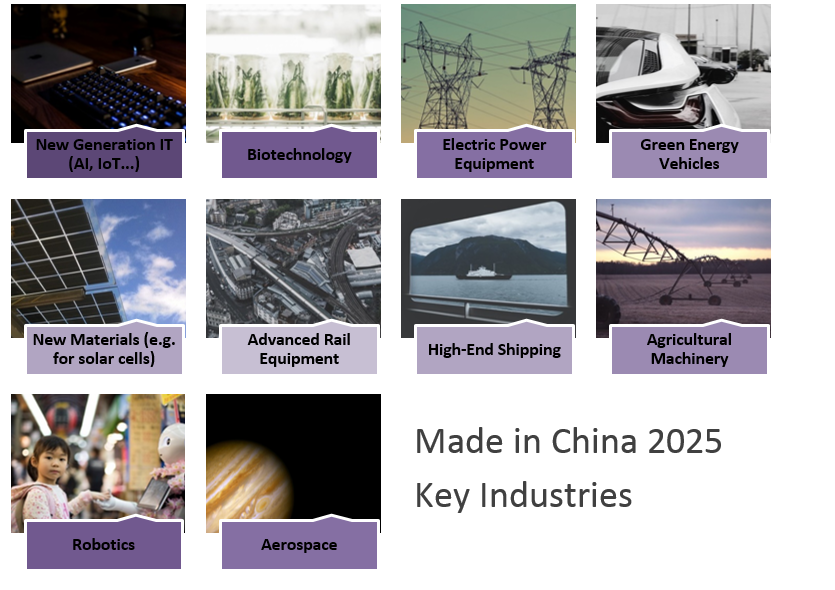 It is also worth noting that China’s recent commitment to reach peak CO2 emissions before 2030 and to achieve carbon neutrality before 2060 will be capital and innovation intensive. Already, there is a rich R&D scene around “green-tech” and this is set to proliferate.

As an example, LMC Automotive, a global data firm, estimates China will be making over 8 million electric cars a year by 2028, from 1 million last year. For comparison, Europe is on track to make 5.7 million fully electric cars by then.

As we mentioned in our previous article, China’s Growth Story: Capturing Opportunities, investors are still, on the whole, under-allocated to China relative its size, not to mention its future potential that we have outlined in this piece. China has been explicit about the fact that technology and innovation as the centerpiece of its expansive, near-term growth strategy. As such, perceptions of China as an emerging market are increasingly outdated, as it rapidly moves towards becoming a global technological powerhouse. We believe China’s ongoing, government-led transformation will trigger growth and disruption in a number of industries, bringing attractive and diverse opportunities for investors that are able to deduce where the financial rewards will be greatest.

[2] https://www.planetary.org/articles/jupiter-mission-callisto-landing (Callisto is a moon that orbits Jupiter)